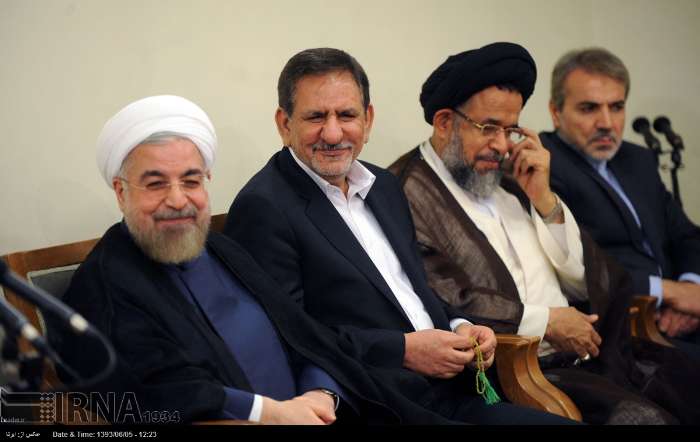 President: Iran utilizing all capacities in support of Palestine

TEHRAN (FNA)- Iran’s President Hassan Rouhani Wednesday voiced his administration’s assertive diplomacy in support of oppressed nations in the region, saying his government has made use of every capacity to back up crisis-hit people in Iraq and Syria as well as the resistance of the Palestinian nation against Tel Aviv’s atrocities in the occupied lands.

Speaking at a meeting between Supreme Leader of the Islamic Revolution Ayatollah Seyed Ali Khamenei and Cabinet ministers on the occasion of the Government’s Week (August 23-29), the Iranian President underlined that his government has made use of all its political, economic and social capacities and capabilities to support people in Iraq, Syria, Lebanon and specially Palestine to overcome their problems.

He expressed hope that the regional nations would witness further victories against terrorism and the criminal Zionist regime of Israel as well as restoration of peace and tranquility to the Middle-East.

Rouhani further pointed to the success of his diplomacy in the last one year since he ascended to power, and said those who were executing the Iranophobia project are about to witness failure now, while “steps have also been taken to decrease and remove sanctions (against Iran) and many more steps are still waiting ahead”.

The President further noted the strategy of his government in the nuclear talks with the six world powers, and stated, “The Iranian side has displayed its logic, transparency and peace-seeking, and we will continue the negotiations in such a manner that if the excessive demands of certain powers impede success of the talks, the world public opinion would take them accountable.”