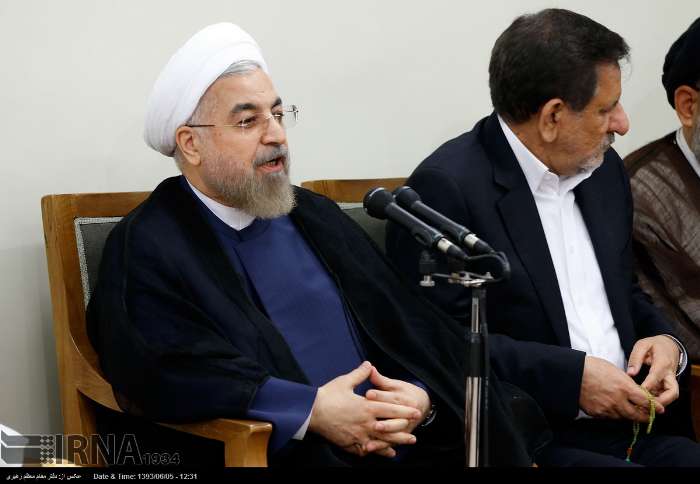 TEHRAN (Tasnim) – Iranian President Hassan Rouhani said on Wednesday that the wall of “Iranophobia” has been brought down in the world’s public opinion in the wake of his administration’s foreign policy approaches.

In a meeting with Supreme Leader of the Islamic Revolution Ayatollah Seyed Ali Khamenei here in Tehran on Wednesday, President Rouhani gave a report on the performance of his administration over the past year.

He said Tehran’s new foreign policy agenda has not only helped lessen Iranophobia in the world, but also has contributed to the removal of “cruel sanctions” imposed on the country.

“Steps have been taken in the field of reduction and removal of sanctions, and much more steps are also ahead of the government,” Rouhani told the Supreme Leader.

The president also touched on Iran’s stance towards the regional nations, and noted, “The administration has employed its whole political, economic and social capabilities to support the people of Iraq, Syria, Lebanon and particularly people of Palestine.”

As regards the administration’s attitude towards the nuclear talks with world powers, President Rouhani said the Iranian negotiating team has demonstrated “logic, transparency and peace-seeking attitude ” in the course of talks.

Rouhani made it clear that Iran will press ahead with the talks in such a way that if “the excessive demands of certain powers” block success in the negotiations, the world’s public opinion will hold the very same powers accountable for the failure.