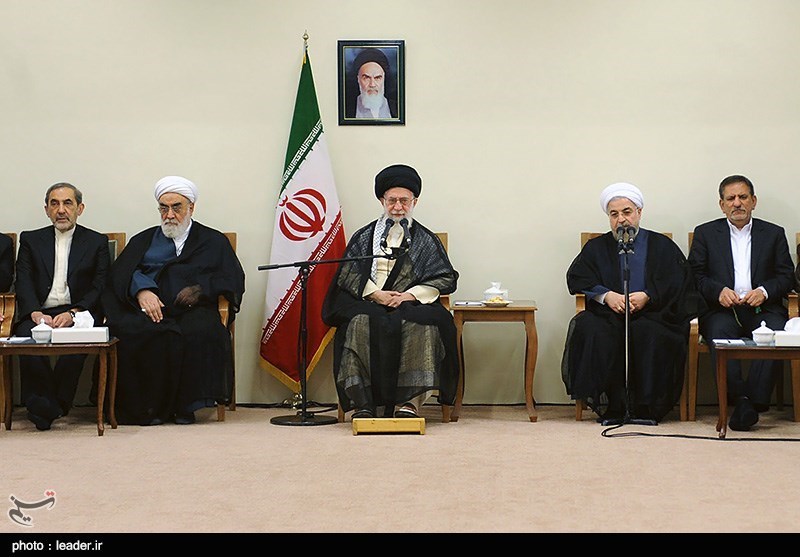 Addressing a meeting with President Hassan Rouhani and members of the Iranian cabinet, here in Tehran on Wednesday, Ayatollah Khamenei said the government has taken “good” stances in the past 12 months.

“Expressing explicit and firm stances on issues such as Palestine, the Zionist regime, Gaza, Syria, Iraq, the Takfiris (extremists) and the US interferences would be in the interests of the Islamic Republic ruling system and, at the same time, does not contradict the language of diplomacy and negotiation,” Ayatollah Khamenei underscored.

The Leader underlined that the administration’s explicit and transparent stance on those issues would “maintain the status of the Islamic ruling system and its strategic depth among the other nations.”

Elsewhere in the meeting, held on the occasion of the national Government Week, Imam Khamenei reiterated the necessity to put the general policies of the “Resistance Economy” into practice, stressing that the grand plan would activate the internal capacities and stimulate production.

“The administration should harmonize the package of its economic policies with the policies of the Resistance Economy, and should eliminate the cases that are incompatible with those policies,” the Leader explained.

Earlier on February 19, the Supreme Leader had in a proclamation outlined a series of general policies to boost the country’s economy and lower its vulnerabilities.

The proclamation, laying out a grand plan for Resistance Economy in Iran, has been issued after consultations with the country’s Expediency Council and based upon the Clause 1 of Article 110 of the Iranian Constitution.

On February 20, President Rouhani underlined that his government is determined to pursue the economic guidelines set by the Supreme Leader.

Rouhani had also thanked the Supreme Leader for declaring the general policies for Resistance Economy, and said the government will make use of all opportunities to pursue these policies.