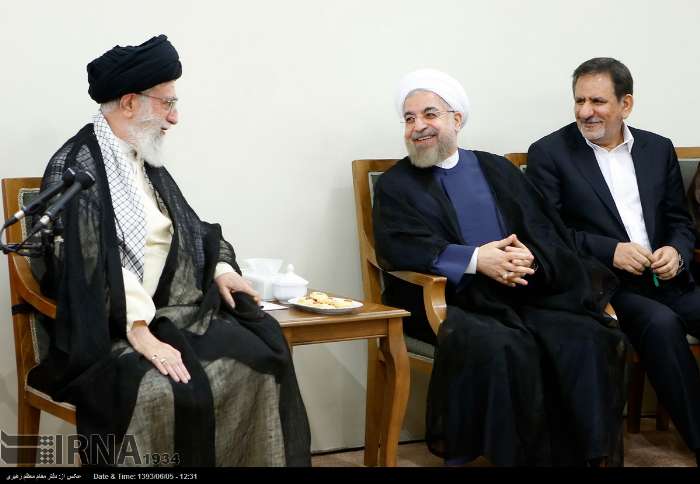 TEHRAN, Aug. 27 (MNA) – The Leader of the Islamic Republic has received 11th cabinet including president Rouhani on the occasion of Government Week.

In the meeting which took place on Wednesday morning, Ayatollah Khamenei made general recommendations for the government which would serve as landmark for the government in line with the official policies of the Islamic Republic of Iran.

Ayatollah Khamenei commended the government achievements in bringing a general peace of mind to society, inflation control, fixing exchange rate, and implementation of health system as ‘valuable’ a year after Rouhani assumed office.

The Leader recommended the cabinet members and government officials to improve the Revolutionary spirit, reliance on domestic capabilities and production, strict adherence to articles of Resistance Economy, especially in agricultural sector and processing industries in rural regions, lending special attention to current surge in science and propagation of knowledge-based companies, taking clear positions on regional developments especially US interference in the region, keeping the government coherent, abiding by redlines, and drawing clear lines of divide with events in 2009 presidential elections, and tolerance in the face of unfair criticism.

The Leader also voiced his appreciation of president’s one-year report of the government record. “The report should be released to the public so that people get informed about the actions and also about the future plans,” he said.

“A good report about the government perpetuates public hope for the future; however, the issue should be wielded with much care so that the report is precise and free of common overstatements,” the Leader recommended.

Ayatollah Khamenei emphasized that public hope would not be improved solely by mere reports; rather, “people seek concrete action and tangible results than words.”

On politics, the Leader recommended the government to stay out of party lines. “It is quite natural that government officials are members of political parties; however, they should not be entrapped in extreme political leanings,” he maintained.

He also pointed to exaggerations and unfair comments about the past governments. “If there is unfairness in criticisms, definitely will be so in judging our records in the future; if we object to conduct of past governments, the best option is to correct and improve in practice those weaknesses, which is better than mere commentary,” the Leader said.

Ayatollah Khamenei provided a positive evaluation of the government’s positions taken during past year. “A clear and strict position about issues such as Palestine, Zionist Regime, Gaza, Syria, Iraq, Takfirists and the US interference would work to the interest of the Islamic Republic of Iran, and is not inconsistent with the language of diplomacy and negotiation,” he recommended the government.