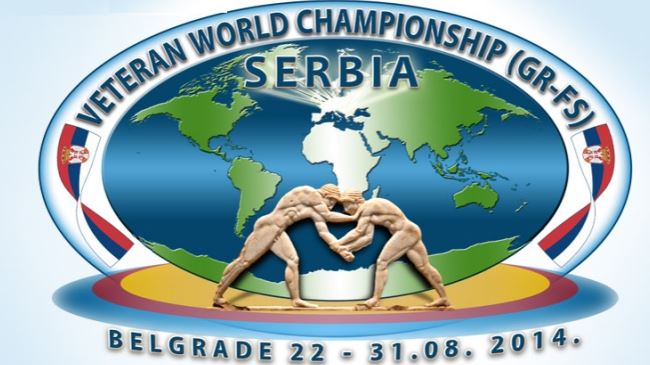 The third edition of World Veteran Wrestling Championship opened in Belgrade, Serbia, on August 22, and will wrap up on August 31, 2014.

Iranian freestyle wrestlers have displayed their skills and strength at the third edition of World Veteran Wrestling Championship in Serbia, picking up eleven medals including three golds.

On Tuesday and day one of the competitions at the indoor Šumice Sport Center in the Serbian capital Belgrade, Rahim Abouei downed his Georgian opponent Estate Goglichudze in the last encounter of men’s 130-kg weight category and collected the gold medal.

Abdoulreza Moujiboushehri lost to a reprehensive from Kazakhstan, Yevgeniy Lim, and grabbed the silver in the 58-kilogram section, while Alimohammad Taheri was downed by Russia’s Munko-Zharga Chimitdorzhiev in the same section to get the silver medal.

In the 63-kilogram weight class, Mohammadtaghi Bolandpour was overpowered by Russian wrestler Sergei Maltsev to receive the silver.

Mohammad Javad Sanayean and Rasoul Toghyani picked up a bronze medal apiece in the 69-kilogram and 76-kilogram weight categories respectively.

Goudarz Kermani, Rahmat Sharifi along with Babak Heydari were awarded a bronze medal each in the 97-kilogram class.

The third edition of World Veteran Wrestling Championship opened in Belgrade on August 22, and will wrap up on August 31.

More than 700 wrestlers from over 50 countries, including Azerbaijan, Bulgaria, Croatia, Cuba, Georgia, Hungary, Kazakhstan, Japan, Poland, Russia, Serbia, Turkey, the United States and Uzbekistan have taken part in the competitions.