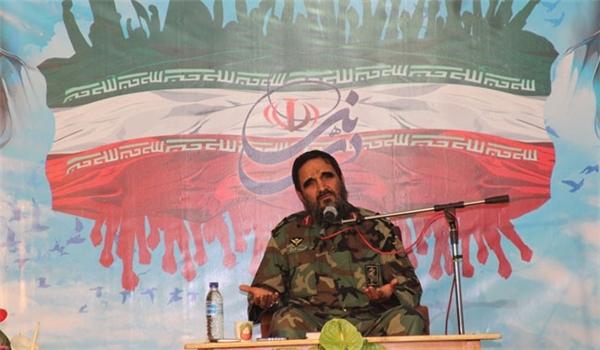 TEHRAN (FNA)- An advisor to the Islamic Revolution Guards Corps (IRGC) commander described a recent proposal made by French Foreign Minister Laurent Fabius on cooperation with Iran in quelling anti-security moves in Iraq as a new plot being hatched by the West against Tehran.

“The proposal by the French foreign minister which asks for Iran’s interference in the war against Daesh (the Islamic State of Iraq and the Levant or ISIL) is a new plot by the global arrogance (a term used in Iran for referring to the US, Israel and their european allies),” General Orouj said on Tuesday.

He said Iraq needs no military interference by any country, and stressed that the religious authority is the strong point of the Iraqi nation which can lead the country towards victory in Jihad (Holy Defense) against ISIL Takfiri terrorists.

General Orouj reiterated that the ISIL and the regional Takfiri groups are under the command of the US and the arrogant powers, and said, “Today God willingly and under the Jihadi management of the Islamic authority, the Takfiri groups are facing strong popular resistance.”

Meantime, the IRGC commander’s advisor pointed to the prepared of the Iranian armed forces to confront foreign threats, and said, “Iran’s Armed Forces are always prepared to defend the country’s borders and they will resolutely and powerfully respond to any aggression.”

In relevant but not quite parallel remarks on Monday, Iranian Deputy Foreign Minister Hossein Amir Abdollahian welcomed Paris decision to cooperate with Iran in the war on terrorism in Iraq, although he lamented that the decision has been made rather “late”.

“The decision by Paris and certain European states for fighting terrorism in Iraq is late, but considerable,” Amir Abdollahian told FNA.

He underlined that war on terrorism should receive attention in the entire region and the world.

His remarks came after Iraqi Foreign Minister Hoshyar Zebari announced on Sunday that Tehran and Baghdad have been cooperating in the campaign against the ISIL terrorist group.

Zebari made the remarks in a joint press conference with his Iranian counterpart Mohammad Javad Zarif who arrived in Iraq on Sunday to meet the country’s new prime minister and other high-ranking officials.

He also appreciated Iran for its cooperation in the fight against terrorism in different parts of Iraq, and said, “At present, a new reality has emerged in the region, and the international community has come to feel the danger of ISIL.”

“We have demanded international support for our war on terrorism, which is a normal move in the contemporary world. When we asked for international support against the ISIL, we didn’t want military forces since there are no deficiencies in the number of Iraqi army forces and the peshmerga (the Iraqi Kurdish fighters),” the Iraqi prime minister said, implying that cooperation with Iran does not include presence of Iranian soldiers in his country.

Zarif, for his part, told reporters in the same press conference that Iran’s anti-terrorism cooperation with Baghdad does not include deployment of troops in the crisis-hit country.

On Saturday, Iranian Defense Minister Brigadier General Hossein Dehqan rejected media reports on the presence of the country’s military forces in Iraq to fight the ISIL, saying that Baghdad does not need assistance of Iranian troops in its combat against the terrorist group.

“We have made official announcements that we would not spare any effort to assist and back up the Iraqi government and nation in grounds of combat against terrorists, but when it comes to military assistance we believe that there is no need to Iran’s direct presence in Iraq to confront Daesh (ISIL) as the Iraqi nation and government, relying on the central role of the religious authority, are able to confront it,” Dehqan said in a press conference in Tehran.

He described the ISIL as a terrorist group at the service of the Zionist regime, and said, “Those who supported them yesterday and support them today too have now come to realize the correctness of Iran’s words that they (the ISIL members) contribute to insecurity in the region.”

“Today the US and France should take action to compensate for their supports (for the ISIL) and become united against Daesh,” Dehqan said.

The US Wall Street Journal in a report in June claimed that Tehran has sent two elite units of its IRGC to Iraq to fight against the ISIL terrorists – an Al-Qaeda offshoot.

Upon arrival in Iraq on Sunday, the Iranian foreign minister renewed Tehran’s support for the Iraqi people’s fight against terrorism.

“The Islamic Republic of Iran has always stood and will stand beside the Iraqi people (in their campaign against terrorism),” Zarif told reporters.

He said the Iraqi people have felt the serious threat of terrorist groups to their country, adding that the nation sees this threat not “as a sectarian strife among different tribes or religious groups but as a major danger to all Iraqi people which needs to be confronted by all”.

Zarif expressed the pleasure that the wave of terrorist attacks has been controlled in Iraq by the help of religious leaders, and said, “We hope that this danger will be obviated with solidarity and coordination among all Iraqi groups, and that peace and tranquility will return to Iraq again.”