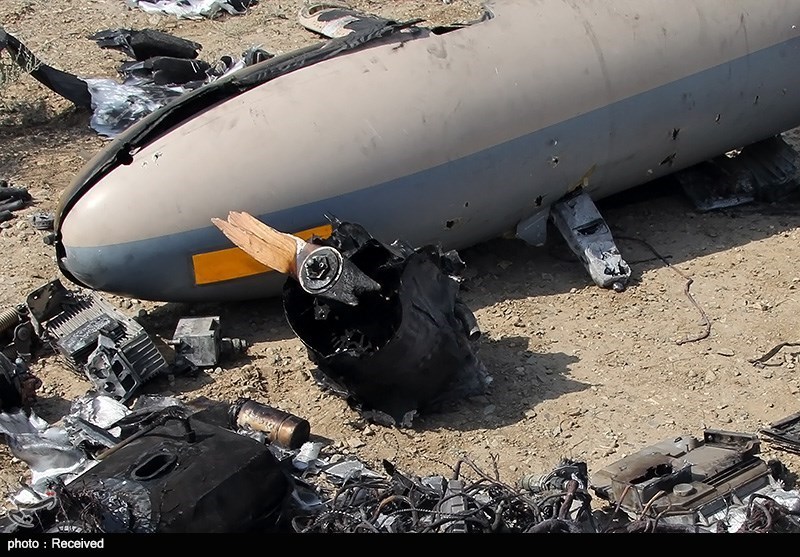 This undated photo released Monday, Aug. 25, 2014 by the Iranian Revolutionary Guards, claims to show the wreckage of an Israeli drone which Iran claims it shot down near an Iranian nuclear site. Iran’s state TV on Monday broadcast footage purported to show an Israeli drone the country’s Revolutionary Guard claimed to have shot down over the weekend near an Iranian nuclear site. The brief video, aired on the Arabic-language Al-Alam TV, shows what the channel says are parts of the drone, scattered in an unidentified desert area.

TEHRAN, Iran (AP) — A crash scene aired on Iranian state television Monday purported to show the wreckage of an Israeli drone shot down near an Iranian nuclear site, prompting questions about how a plane with limited range could have penetrated so deeply and whether it is indeed what Tehran says it is.

The brief video showed what the channel described as parts of the battleship-gray drone scattered in an unidentified desert area. The channel identified the unmanned vehicle as a Hermes 450, a known Israeli model.

There were no visible Israeli markings on the aircraft in the footage. Israel’s military has refused to comment on the matter.

The West suspects Iran’s nuclear program is geared toward building a nuclear weapon. Iran denies the charge, saying its nuclear activities are for peaceful purposes only, such as power generation and medical research. Israel has not ruled out taking unilateral military action against Iran’s nuclear facilities.

Iran’s powerful Revolutionary Guard said in a statement Sunday its forces fired a missile as the drone neared Iran’s uranium enrichment facility in Natanz, some 240 kilometers (150 miles) south of the capital, Tehran, without elaborating. Guard spokesman Gen. Ramazan Sharif also said Sunday that Iran allowed the drone to continue its path to find out more about its mission.

Gen. Amir Ali Hajizadeh, head of the Guard’s airspace division, insisted Monday that the drone was Israeli, though he said its last flight originated elsewhere.

“The operational range of the drone indicates it did not start its flight in Israel but departed from a country in the region,” he said. He added cryptically: “We have some clues.”

Iranian Foreign Ministry spokeswoman Marzieh Afkham condemned the drone’s presence as a violation of Iranian territorial integrity and said “pursuing the case in legal and international bodies is our right,” the semi-official Fars news agency reported.

Hajizadeh said the drone’s range was about 800 kilometers (500 miles) and that it had two front and side cameras capable of providing high-resolution panoramic imaging.

The manufacturer of the Hermes 450, Israel-based Elbit Systems, lists its base range as only 300 kilometers (200 miles), however.

Israel is about 1,000 kilometers (620 miles) away from Iran’s westernmost boundary and Natanz is about 600 kilometers (370 miles) inland from the closest border point in Iran.

Calls by The Associated Press to Iranian officials for details on the drone were not immediately returned. The aircraft was not shown to foreign media.

Other countries also operate Hermes 450 drones, including Britain, the United States and Azerbaijan, Iran’s neighbor to the north.

Iranian state-linked media previously touted Iranian-made drones that bore some resemblance to the Israeli model. That is perhaps what was being shown in the footage, British aviation expert Paul E. Eden said.

He noted the timing of the announcement, given that hard-line elements within Iran want to see nuclear talks with world powers fail and could try to score additional points by embarrassing Israel. He also questioned where the plane could have taken off given its range.

Eden said it is possible that the Israeli drone could operate beyond its official range, but he too was skeptical given how far into Iranian airspace the drone would have penetrated.

“If this seems to be posing a threat, you don’t let it fly for hundreds of miles,” Eden said. “It doesn’t ring true.”

Iran’s nuclear program has targeted by espionage and sabotage efforts in the past. In 2010, the so-called Stuxnet virus temporarily disrupted operation of thousands of centrifuges, key components in nuclear fuel production, at Natanz.

Iran says it and other computer virus attacks are part of a concerted effort by Israel, the U.S. and their allies to undermine its nuclear program through covert operations. Israel has never commented on the allegations but is widely believed to have been involved in the Stuxnet attack.

Iran has also said that it discovered tiny timed explosives planted on centrifuges but disabled them before they could go off.

On Monday, Asghar Zarean, the deputy head of Iran’s atomic department, told the semi-official ISNA news agency that malware discovered over the past month had targeted a nuclear facility that went online over the weekend.

He likely was referring to the plant in the central city of Isfahan inaugurated Saturday. Under an interim nuclear deal with the world powers, the facility will convert a type of uranium into a material that cannot be used to make nuclear weapons.