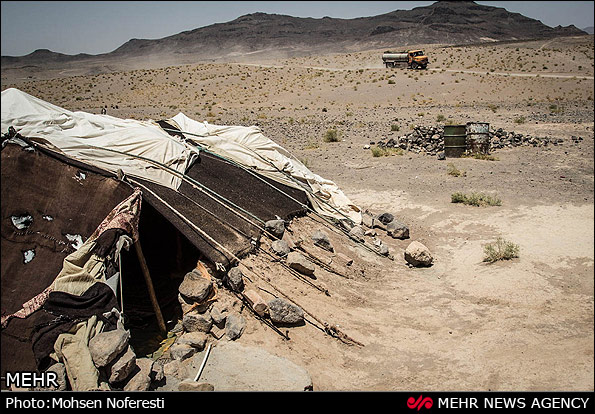 Semnan receives the lowest precipitation in the country. Drought and the subsequent rise in temperature, pests and plant diseases are the major causes of fluctuations in agricultural products, and contribute to uncertainty in production. Farmers should always be concerned with their annual income, mortgage repayments, and other fixed and hidden expenses, where, in the majority of cases, they would not afford to pay.

Farmers should grapple with issues such as whims of the climate, a large variety of plant pests and diseases, and the livestock epidemics. Price fluctuations along with uncertainty and risk in crops minimize the possibility of attracting investments in agricultural sector.

Seyed Majid Mousavi, head of Semnan Agricultural Jihad organization local office told Mehr News that production in apiary and fishery sectors had been in decline due to drought. “Drought in agricultural year of 2014-15 inflicted heavy damage on Semnan province in wide range of sectors,” he added. “Drought and natural hazards took a heavy toll on the livestock, killing more than 86,000 heads of small livestock and 1398 heads of  large livestock across the province,” Mousavi added.

He estimated the financial resource required for handling the drought as $143.8mn. “The province’s gardens and fruit trees should undergo drastic changes in cropping pattern and move in the road to development,” added he, believing that the same changes had been introduced to agriculture.

He estimated the damages by the drought as $104.7mn. “77 roadmaps have been provisioned to compensate the drought damages in different sections of the Organization,” said the head of Agricultural Jihad Organization, and that “even we have recorded decline in camel’s milk and body weight.”

“The drought was a great problem especially for the wandering pastoralist in winter resorts; in collaboration with the governorate and other responsible government bodies, these herders were sent to summer cooler regions after they received feed for their cattle,” Mousavi said.

He expressed satisfaction that increased precipitation early in spring greatly helped the wandering pastoralists, despite the ensuing flood inflicted some damage to their summer resorts. “Flood in Mehdishahr, Shahroud, Damghan and Miami destroyed the livestock graveled pathways within days from reconstruction, which brought additional costs for us; for example, we repaired 300km of such graveled pathways of Mehdishahr 2 times within 3 days,” Mousavi asserted.