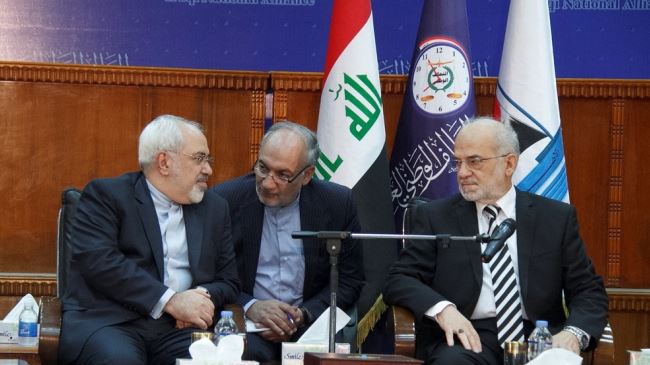 “Fighting threats and extremism is not possible merely through military option, and Iran is prepared with seriousness to cooperate in countering terror and intimidation,” Zarif said at a Sunday meeting with the head of National Iraqi Alliance, Ibrahim al-Jaafari, and a group of Sunni political leaders and activists in Baghdad.

Zarif touched on the atrocities committed by extremist terrorists of European, North American and Russian nationalities against Iraqi and Syrian civilians of different religions and ethnicities, and described terrorism as a threat with no frontiers and not limited to any specific country.

The Iranian foreign minister argued that countering terrorism requires a “serious intellectual, political and economic campaign” and praised Iraqi factions for their interaction in facilitating the advance of the country’s political process.

In their ongoing rampage in Iraq and Syria, the Takfiri ISIL terrorists have threatened various communities, including Shias, Sunnis, Kurds, Christians, Izadi Kurds.

The US launched aerial attacks against ISIL militants in northern Iraq earlier this month to push them back and to protect American personnel.

“We hope to witness the flourishing of Iraq and formation of a government which pursues the rightful demands of Iraq in accordance with regulations and which safeguards the sovereignty of religion and territorial integrity,” Zarif added.

On August 11, Iraqi President Fouad Massoum appointed the country’s then deputy parliament speaker Haider al-Abadi as the country’s new prime minister, and tasked him with forming the next government within 30 days and presenting it to the parliament for approval. Abadi was nominated for the post by the Iraqi National Alliance, a coalition of Shia parties.

Shortly after being designated as premier, Abadi called for national unity against the “barbaric” campaign by the Takfiri ISIL terrorists inside the country.