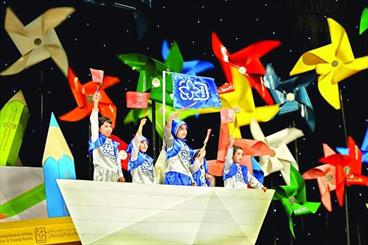 ‘Islamic World Works’ to go on display in Children filmfest

TEHRAN, Aug. 25 (MNA) – The titles of 8 films have been announced to be reviewed in the 28th International Festival of Films for Children and Young Adults.

According to MNA, a number of international films on Islamic topics are to be reviewed in a special section called Islamic World works on the sidelines of international children film festival. The titles for 7 short films and a feature film are as follows:

“Agri and the Mountain” by Hasan Sarin from Turkey, “Messi’s Fan in Baghdad” by Sahim Omar Khalife from Iraq, “From the Audience’s Point of View” by Sohrab Fatoorehchi from Tajikistan, “Comedy of Chocolate” by Chayron Nesa from Indonesia, “Rain Tree” by Andra Fambrianto from Indonesia, “Ishara” by Natalie Kridie from Lebanon, and “Unseen” by Tarogh Rimavi from Jordan.

The feature film “Giraffe” by Rani Masalha from Lebanon has also been accepted into this category.