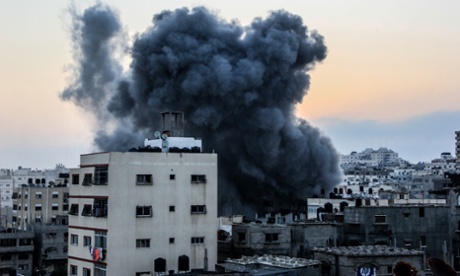 Two multi-storey buildings in Gaza have been completely destroyed by Israeli air strikes in less than 24 hours, possibly signalling a new tactic in Israel’s military campaign.

A 12-storey apartment building in Gaza City was brought down on Saturday evening and a seven-floor office building in Rafah was razed early on Sunday.

The hits followed warnings by the Israel Defence Forces, in leaflets, text messages and automated phone calls. The text of a leaflet dropped from aircraft said: “The IDF intends to attack terrorists and terror infrastructure across the Gaza Strip … Israel is currently attacking, and will continue to attack, every area from which terror activities against Israel originate. Every house from which militant activity is carried out, will be targeted. For your own safety, prevent terrorists from utilising your property for terror agendas, and stay away from every site in which terrorist organisations are operating.”