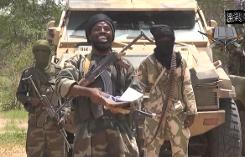 Boko Haram’s leader said he has created an Islamic caliphate in a northeast Nigeria town seized by the insurgents earlier this month, in a video obtained by AFP on Sunday.

“Thanks be to Allah who gave victory to our brethren in (the town of) Gwoza and made it part of the Islamic caliphate,” Abubakar Shekau said in the 52-minute video.

He declared that Gwoza, in Borno state, now has “nothing to do with Nigeria.”