Iranian commander: Our fingers ready to pull trigger to kill any threat 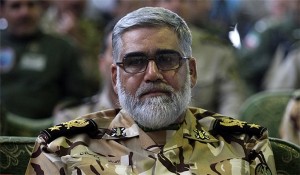 “Today, the fingers of the Armed Forces are on the trigger and the Bajij (volunteer) forces, the Islamic Revolution Guards Corps (IRGC), the Army and the Law Enforcement forces are now enjoying the highest level of might and readiness,” Pourdastan said, addressing people in the Northern province of Mazandaran on Friday evening.

Stressing that the Armed Forces monitor all threats and are prepared to give a crushing response to any possible aggression, he said, “The Armed Forces, which enjoy a huge capacity and are equipped with all state-of-the-art weapons of the world, are ready to defend the country and they do not allow the slightest harm to the country.”

In relevant remarks in November, Supreme Leader of the Islamic Revolution Ayatollah Seyed Ali Khamenei warned Iran’s enemies to avoid even thinking of any aggressive move against the country, stressing that the Iranian Armed Forces are ready to give such a crushing response to any threat that aggressors will never forget.

Also in December, Commander of the Islamic Revolution Guards Corps (IRGC) Major General Mohammad Ali Jafari underlined that Iran will give a crushing response to any possible aggressor.

Major General Jafari deplored the US repeated rhetoric of “military option against Iran is on the table, as “ludicrous” and said, “Repetition of such an absurd sentence by the officials of the US and the fake and evil Zionist regime (of Israel) sounds funny to the Iranian nation.”