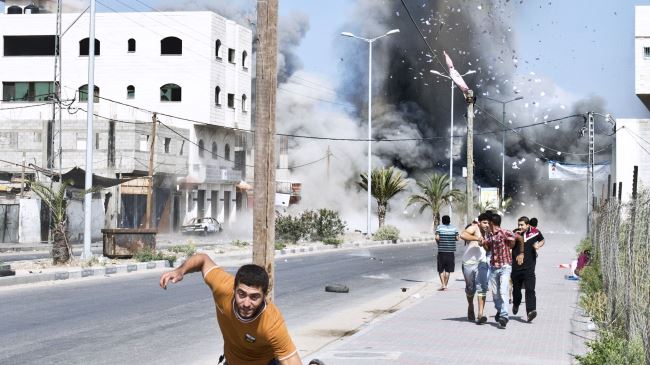 Palestinians run away from debris after a bomb from an Israeli airstrike hit a house in Gaza City on August 23, 2014.

“The criminal acts of the occupying Zionist regime are continuing in light of the unprecedented silence of the international community particularly the self-proclaimed advocates of human rights and the negligence of many governments,” Larijani said on Saturday.

He added that the world should not stay put while the Israeli regime has been using a variety of bombs and explosives against Palestinians in its aerial, sea and ground operations.

Larijani said the besieged Gaza enclave has been experiencing “unprecedented destruction of the environment” since the start of Israeli war last month.

He also pointed out that similar crimes are being committed by Israel’s allies and terrorist groups in Syria and Iraq, urging the international community to condemn the hideous acts.

Over 80 people have lost their lives since Israel resumed attacking Gaza on August 19, after Israeli officials left the negotiating table with Palestinian resistance movement Hamas following the collapse of truce talks in the Egyptian capital, Cairo.

The overall death toll from the Israeli onslaught has now neared 2,100. Some 10,500 Palestinians have been injured since Israel started the offensive on July 8.