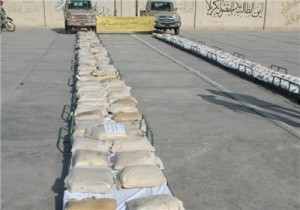 TEHRAN (Tasnim) – Iranian border guards have managed to seize a cargo of 3 tons of illicit drugs near the southeastern city of Saravan on the border with Pakistan, Border police commander of Sistan and Baluchestan Province announced on Saturday.

“Following a week of intelligence work and using informed sources with sincere and effective cooperation of local residents, Saravan Border Regiment’s forces found that two drug rings were going to transfer a heavy cargo of narcotics to the country,” Raham Bakhsh Habibi said on Saturday.

“The drug traffickers had planned to bring the cargo into Iran but they failed to reach their sinister goals because of the vigilance and rapid response of the border guards,” he said.

During the operation, in which heavy losses were inflicted on the drug traffickers, the Iranian border guards managed to seize 3,236 kg of various kinds of narcotics, including opium, heroin and morphine, Habibi said.

The commander emphasized that some weapons and ammunition as well as two cars and a motorcycle were also seized in the operation.