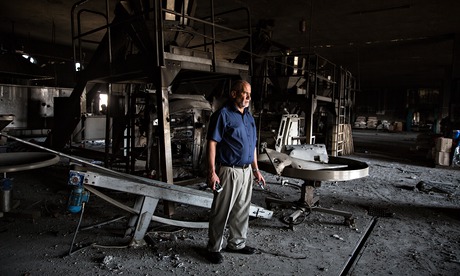 Mohammed Al Tebani inside his factory in Gaza, which made ice cream among other sweets, and was destroyed by targeted shelling. Photograph: Sean Smith for the Guardian

Gaza’s economy will take years to recover from the devastating impact of the war, in which more than 360 factories have been destroyed or badly damaged and thousands of acres of farmland ruined by tanks, shelling and air strikes, according to analysts.

Israeli air strikes on Gaza have resumed since a temporary ceasefire brokedown on Tuesday after rockets were fired from Gaza. The Israeli Defence Force said it launched air stikes on 20 sites on Friday morning and Gaza health officials said two Palestinians were killed in an attack on a farm.

Almost 10% of Gaza’s factories have been put out of action, said the Palestinian Federation of Industries. Most other industrial plants have halted production during the conflict, causing losses estimated at more than $70m (£42m), said the union of Palestinian industries. The UN’s food and agriculture organisation (FAO) said about 42,000 acres of croplands had sustained substantial direct damage and half of Gaza’s poultry stock has been lost due to direct hits or lack of care as access to farmlands along the border with Israel became impossible.