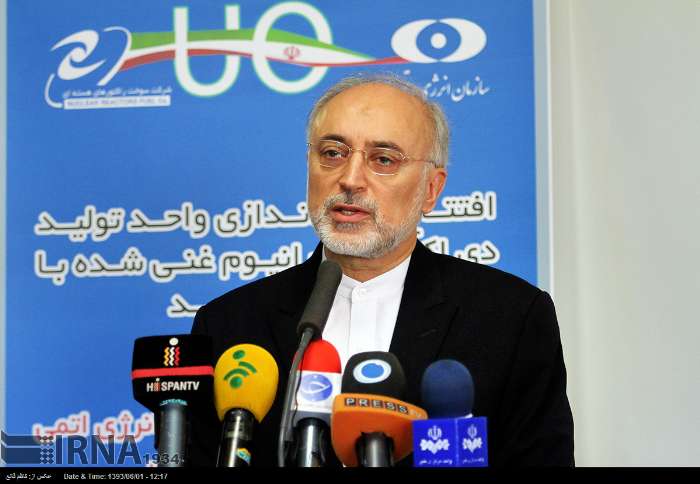 TEHRAN (FNA)- Head of the Atomic Energy Organization of Iran (AEOI) Ali Akbar Salehi praised Iranian nuclear scientists’ for their pioneering role, and said the Uranium Dioxide (less than 5% purity) production unit which kicked off work in the Central city of Isfahan today has been built fully by domestic experts and without foreign assistance.

“Our young people had no model similar to this facility (to copy) and they have managed to launch this highly important ring of fuel production for Bushehr nuclear power plant’s reactor relying on their several-year-long efforts and innovation,” Salehi said, addressing a ceremony to inaugurate the 103A Unit used for enriched uranium dioxide production in Isfahan on Saturday morning.

He further explained that the UF6 gas is turned into uranium oxide powder in the 103A unit, and said, “We should pay attention that this unit is used for uranium enriched to less than 5-percent-grade and is not in violation of our International Atomic Energy Agency undertaking.”

Salehi reminded the terms of the Geneva agreement between Iran and the Group 5+1 (the US, Russia, China, Britain, France plus Germany), where Iran took up to oxidate products enriched less than the 5-percent grade, and said the process has already started, meaning that “this undertaking has been fulfilled (by Iran) in due time as well”.

“The Uranium Dioxide (UO2) produced in this plant is used for the production of fuel plates for the nuclear power plants, including Bushehr,” he added.