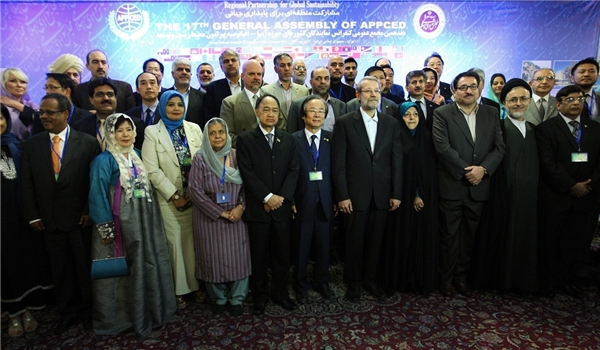 TEHRAN (FNA)- The 17th General Assembly of the Asia-Pacific Parliamentarians Conference on Environment and Development (APPCED) opened in Tehran on Saturday.

Iranian Parliament Speaker Ali Larijani will preside over the three-day meeting of the 17th APPCED General Assembly which will end on Monday afternoon.

The gathering aims to discuss issues related to economic development and environmental challenges faced by the Asia and Pacific region.

The 16th APPCED conference was held in Nepal’s capital of Kathmandu in January 2013 with more than 100 delegations in attendance.

With 46 member-states, APPCED seeks joint measures to deal with environmental concerns in Asia and the Pacific.

APPCED was founded in June 1993 by the Korean Parliamentary League on Children, Population and Environment (CEP) following the Rio Earth Summit in 1992. The purpose of the inception was to organize meetings among member countries to seek joint measures against environmental concerns in the regions.