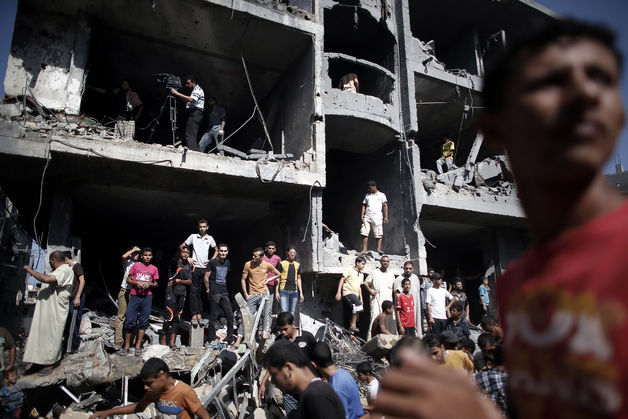 Photographer: Thomas Coex/AFP/Getty Images
Palestinian gather around the rubble of a building destroyed following an Israeli military strike in Rafah in the south of the Gaza Strip on August 21, 2014

Defense Minister Moshe Ya’alon said that Israeli forces “will continue to hunt down and attack Hamas leaders at any time and wherever they may be.”

The targets of yesterday’s attack were senior commanders of the Hamas militia, known as the Al-Qassam Brigades, which has killed more soldiers in the past six weeks than in any of Israel’s military conflicts since the 2006 Lebanon War. The raids, coming close behind an apparent attempt on the life of Mohammed Deif, Hamas’s top military chief, were followed by a barrage of rockets on Israel and a wave of Israeli aerial attacks on the Palestinian territory.

The surge in violence threatens to overwhelm Egyptian efforts to halt six weeks of hostilities that have killed 2,083 Palestinians, including 27 yesterday, according to Gaza officials, and 67 on the Israeli side. The last in a series of Egypt-brokered truces unraveled Aug. 19.

“Eliminating the leadership damages their ability to fight effectively,” Shavit, who led Mossad from 1989 to 1996, said in a phone interview yesterday. “It takes time for their replacements to know their new jobs. It also intimidates and makes them spend a bigger chunk of their time making sure they’re not killed as well.”

Major international airlines maintained their flights. In July, the Federal Aviation Administration barred U.S. carriers from flying to Israel for two days after a Gaza rocket landed within a mile of the airport. Israel, the U.S. and European Union consider Hamas a terrorist organization.

“Killing our leaders won’t weaken us,” the Al-Qassam Brigades said in a message distributed to reporters in the Gaza Strip. “The enemy will pay a very heavy price for this crime.”

Gazans poured into the streets yesterday for the funeral of top Al-Qassam commander Deif’s wife and two children, killed in an Aug. 19 Israeli air strike. Deif, who has been the target of Israeli assassination attempts at least five times, escaped the attack, according to statements issued by his lieutenants.

In the past, Israel has gone after political and religious leaders to weaken Hamas, as in 2004 when it killed the group’s founder, Sheikh Ahmed Yassin, in a missile attack from an AH-64 Apache helicopter gunship. A month later, Hamas’s top political chief, Abdel Aziz Rantisi, was killed in similar fashion.

Yahya Ayash, the Hamas bombmaker known as ’’the engineer’’ was killed in 1996 when he answered a booby-trapped mobile phone.

“It’s the next step in a process that has three layers,” said Shavit. “First you go after the terrorist military leadership, then you hit the political leadership, and in the case of Yassin, it was important to reach the spiritual leadership.” He said there is currently no religious leader on par with Yassin who merits assassination.

The Mossad has occasionally botched its missions against Hamas, as in the 1997 attempt on the life of Khaled Mashaal, the organization’s top political leader who’s now living in Qatar. Two agents approached Mashaal while he was visiting the Hamas offices in Amman, Jordan, and sprayed his left ear with poison.

The two were captured by Jordanian security agents, and Netanyahu, in his first term as prime minister, was forced to send the antidote, carried over by Shavit’s successor, Danny Yatom, who was later pushed to resign.

Gaza’s Hamas political and military figures, such as Ismail Haniyeh and Mahmoud Zahar, have been in hiding throughout the fighting, making the Aug. 19 overnight raid the most successful known achievement in Israel’s campaign to cripple the movement’s leadership. After the attack, Hamas security forces arrested and executed three suspected Palestinian collaborators with Israel, according to Al-Rai, the group’s news agency.

The airstrike in the southern city of Rafah killed Raed Attar, who the military said masterminded the construction of tunnels to infiltrate Israel and the 2006 operation in which soldier Gilad Shalit was captured. Shalit was held for five years before Israel won his release by trading him for more than 1,000 Palestinian prisoners.

The raid also killed Mohammed Abu Shamala, commander of Hamas’s military operations in the southern Gaza Strip, and Mohammed Barhoum, a Hamas weapons smuggler and fundraiser, the military said in an e-mailed statement.

As the violence flared, Israeli cabinet ministers authorized the call-up of 10,000 reserves troops in a telephone vote, a Defense Ministry official said on condition of anonymity because the government didn’t want to officially announce the mobilization yet.

Egypt’s foreign ministry said yesterday it had contacted officials on both sides to urge them to recommit to a cease-fire. Emir Sheikh Tamim bin Hamad Al Thani of Qatar, who has sought to help broker the cease-fire talks, also met with Palestinian President Mahmoud Abbas and Hamas’s Mashaal to discuss developments in Gaza, the official Palestinian news agency Wafa reported.

Israel started its ground offensive after weeks of rocket fire and airstrikes. It withdrew forces on Aug. 5 under one of several cease-fires that have been shattered. It accuses militants of causing civilian casualties by locating operations within built-up areas and using civilians as human shields.

The Egypt-mediated talks had aimed at reaching a lasting accord addressing disputes unresolved by pacts ending two previous conflicts. Hamas has demanded an end to the blockade on the coastal territory that Israel, citing security considerations, initiated after the group won Palestinian elections in 2006. Israel has sought assurances that militants won’t resume their rocket attacks and cross-border raids.

“Operationally it’s possible, but politically you can’t do it,” he said. “Although we are a strong country, we are tiny and it would be very hard to ignore the world’s opposition to our going into Gaza again.”