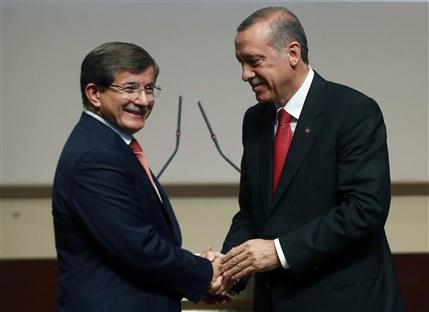 Turkey’s Davutoglu expected to be a docile premier

Turkey’s president-elect Recep Tayyip Erdogan, right, greets Foreign Minister Ahmet Davutoglu after he announced Davutoglu as his ruling Justice and Development Party’s new leader, in Ankara, Turkey, Thursday, Aug. 21, 2014. Davutoglu, hand-picked by president-elect Erdogan to succeed him as prime minister, is expected to accept the largely backseat role although he is known to be an ambitious politician. (AP Photo/Burhan Ozbilici)

ANKARA, Turkey (AP) — Turkish Foreign Minister Ahmet Davutoglu, hand-picked by president-elect Recep Tayyip Erdogan to succeed him as prime minister, is expected to accept a largely backseat role as his boss strives to make his new job the most powerful position in the land.

But Davutoglu is known to be ambitious – and Turkey has seen cases in the past where presidents have tried and failed to control their prime ministers.

Erdogan, who nominated Davutoglu Thursday to be premier, is counting that the 55-year-old continue to be the staunch loyalist he proved himself to be during Erdogan’s long tenure as premier. While he has a patchy foreign policy record, Davutoglu also commands respect within the ruling Justice and Development Party, or AKP, and is seen as a politician who can steer the party to another victory in elections next year.

A former professor of international relations, Davutoglu has led Turkey’s foreign policy since 2003 both as foreign minister and as Erdogan’s chief adviser. He is expected to be confirmed as the AKP’s chairman at a party congress next week, before being appointed by Erdogan to form a government early next month.

Erdogan, who has dominated Turkish politics for over a decade, became Turkey’s first popularly voted president in elections on Aug. 10. He takes office on Aug. 28.

The Turkish leader has made no secret of his ambition to strengthen the powers of the presidency, until now largely ceremonial. He has indicated he intends to keep his grip on the executive by making use of the presidency’s seldom-used powers, including calling and presiding over Cabinet meetings. Analysts said Erdogan wanted to install a friendly prime minister who will allow him to largely control government.

“Under normal circumstances, you would expect that Mr Davutoglu would not be happy that the president meddles in his affairs,” said Soli Ozel of Istanbul’s Kadir Has University. “I don’t think he has yet enough political capital to challenge (Erdogan) very directly and very harshly.”

Davutoglu, who lacks Erdogan’s oratory skills and strong leadership qualities, is nevertheless regarded as a figure capable of keeping the party together after Erdogan becomes president. Turkish history has two examples of former prime ministers who sought to maintain control of parliament after moving to the presidency, only to see their parties collapse.

Davutoglu will be tasked with winning a majority in elections in 2015 that would allow the AKP to re-write the Constitution and change Turkey’s political system to the presidential one that Erdogan longs for.

In his early years in office, Davutoglu won widespread praise for his efforts to cultivate long neglected ties in the Middle East and build bridges with Turkey’s old foes – a policy Davutoglu termed “zero problems with neighbors.” Turkey sought to engage with former rivals Greece, Syria, Armenia, Iran and Russia; enacted reforms to boost Turkey’s EU membership bid; and acted as a mediator in disputes – all of which helped raise Turkey’s international profile.

But critics say his tenure has also been marked by oversights and missteps that have left Turkey with a few allies in the Middle East.

Turkey has been among the most outspoken critics of Israel, a onetime staunch ally, for its military operations in Gaza and has built close ties with Hamas. Relations with Egypt are strained because of Turkey’s support to ousted Islamist President Mohammed Morsi. Under Davutoglu, Turkey has been accused of supporting jihadists in Syria in the hope that it would quickly bring down President Bashar Assad’s regime. Turkey rejects allegations that it supports jihadist groups.

Turkey’s main opposition party this month brought forward a no confidence motion against Davutoglu over his handling of a hostage crisis in Iraq, accusing him of mismanaging the crisis which erupted when militants seized 49 people, including children, from the Turkish consulate in Mosul in June.

Critics say Turkey has become too involved in many countries’ internal affairs, often taking a Sunni sectarian bias that has deprived Turkey of its neutrality and powers to influence international relations.

“Between 2002 and 2011, Turkey had become a much more autonomous political actor, more of a regional power center,” said Ozel, the analyst. “Turkey (then) very imprudently … shifted its secular, above sectarian-divisions position. It became part of the sectarian divide that led to policy mistakes.”