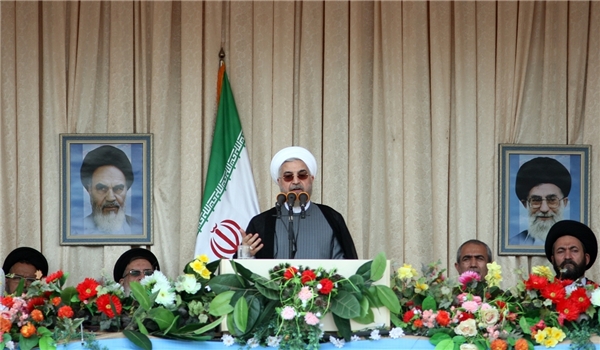 TEHRAN (Tasnim) – Iran’s President Hassan Rouhani slammed the sanctions against the country over its peaceful nuclear energy program as cruel and illegal which have put the Iranian people under pressure.

“Although a part of sanctions has been lifted, we still remain under sanctions. All Iranian people expect the government to remove the cruel sanctions in the framework of the law and by safeguarding the rights of the nation. All of us have the same demand, and it is among the administration’s priorities,” said Rouhani in his speech in the Iranian northwestern city of Ardebil.

Rouhani emphasized that in countering anti-Iran sanctions, his administration has enjoyed the support of the whole nation as well as confirmation from the Supreme Leader of the Islamic Revolution Ayatollah Seyed Ali Khamenei.

President Rouhani further pointed to extremism and violence in the region and said moderation is key to tackling such problems.

“Moderation initiative which was put forward by Iran at the United Nations was everyone’s demand. Nobody could refrain from voting in favor of the Resolution WAVE (World Against Violence and Extremism) which was proposed by Iran at the UN General Assembly,” noted Rouhani, adding that today all the world is fed up with violence.

On December 18 last year, the UNGA overwhelmingly voted to approve Rouhani’s WAVE proposal, which calls on all nations across the globe to denounce violence and extremism. The Iranian president had made the proposal in his address to the UN Disarmament Conference in New York on September 25.

Under the resolution, the Assembly would urge member states to take “appropriate measures to strengthen universal peace and to achieve international cooperation in solving international problems of an economic, social, cultural, or humanitarian character.”