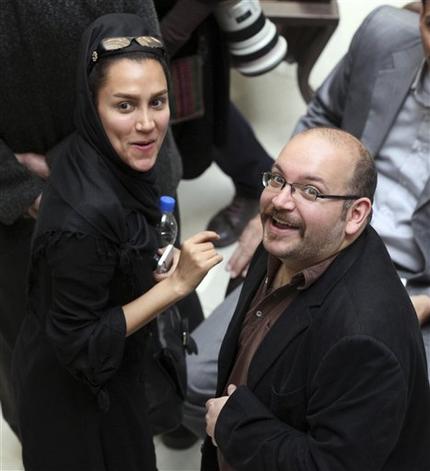 In this photo taken on April 11, 2013, Jason Rezaian, right, an Iranian-American correspondent for the Washington Post, and his wife Yeganeh Salehi, an Iranian correspondent for the Abu Dhabi-based daily newspaper The National, smile as they attend a presidential campaign of President Hassan Rouhani in Tehran, Iran. They have been held in custody for a month since their detention July 2014 in Iran, suggesting a possible struggle between a new guard of moderates pushing for greater freedom and the old hard-line establishment. (AP Photo/Vahid Salemi)

A photojournalist arrested in Iran alongside Washington Post correspondent Jason Rezaian and his wife was released on bail Wednesday, a family source said.

Separately, the State Department said U.S. officials raised the arrest and detention of The Post’s Tehran bureau chief, an American citizen, when they met for rare direct talks with Iranian diplomats this month. Rezaian’s wife, journalist Yeganeh Salehi, is an Iranian citizen.

Both developments come amid signs that the case is part of an internal Iranian political struggle.

At her family’s request, The Post is not publishing the name of the photojournalist released Wednesday. A relative in the United States said she had been freed but had few other details. The relative spoke on the condition of anonymity to protect the woman’s safety.

The State Department had no immediate comment on her case.

Like Rezaian, the photojournalist holds dual U.S. and Iranian citizenship and had traveled back and forth between the United States and Iran.

Iran does not recognize dual nationality and maintains that the United States has no say in detentions by Iran of those who hold U.S. and Iranian passports.

State Department spokeswoman Marie Harf confirmed Tuesday that the Rezaian case was on the agenda when senior U.S. officials met with Iranian envoys this month in Geneva.

She declined to provide any details of the discussion.

“We always raise concerns about any American citizen of concern to us,” Harf said.

She again called on Iran to release Rezaian.

The U.S.-Iran meeting was the first such gathering since Rezaian’s arrest. It was one of only a handful of direct sessions between the two countries since the United States and Iran broke off diplomatic ties more than 30 years ago after the 1979 takeover of the U.S. Embassy in Tehran and the seizure of American hostages.

Four weeks after Rezaian’s arrest, his case looks increasingly like an attempt by hard-liners to embarrass and undermine President Hassan Rouhani, a comparative reformer.

The arrest took place at a critical juncture as Rouhani tries to complete the nuclear deal by a November deadline and improve ties with the United States, analysts and diplomats said. Rezaian was among the most prominent foreign journalists working in Tehran and had covered the maneuvering between Rouhani and unelected government bodies suspicious that the potential deal would weaken Iran.

Although Iran’s official willingness to bargain over the past year was the first breakthrough after years of fruitless international efforts to rein in the country’s disputed nuclear program, it remains unclear how far Rouhani can go and whether any deal he brokers can hold up.

Rouhani’s apparent inability either to prevent Rezaian’s arrest or to win his quick release undermines his international credibility, said Haleh Esfandiari, director of Middle East programs at the Wilson Center and herself a former detainee in Iran’s Evin prison.

“This was really trying to undermine Rouhani and all his efforts to come to a deal with the United States and also open up the society more,” Esfandiari said. “It’s definitely based on an internal rivalry.”

A brief statement Monday from Iran’s judiciary spokesman that Rezaian is being held for unspecified security allegations may further the theory that the arrest is part of a power struggle.

To date, the only official statements about the case have come from individuals or institutions associated with Iran’s powerful conservative bloc, which is widely skeptical of Rouhani and generally opposes the potential agreement curbing Iran’s nuclear program.

Rouhani, elected in 2013 on a platform of moderate reform and engagement with the West, has said nothing publicly. Iranian Foreign Minister Mohammad Javad Zarif, who is leading the nuclear talks and has met directly with Secretary of State John F. Kerry, also has not spoken publicly about the arrest.

Both men will be in New York in September for the annual United Nations General Assembly gathering, which for years has has served as a platform for Iranian leaders.

Reuters reported that parliament criticized the official for allowing students expelled over anti-government protests in 2009 to return to university classes. His ouster marks the first time parliament has sacked a government minister since Rouhani’s election.

Rezaian, 38, has had no contact with his family, employer or with Swiss diplomats who sought to visit him on behalf of the United States. Post Executive Editor Martin Baron has said there is no justification for Rezaian’s seizure and continued detention.