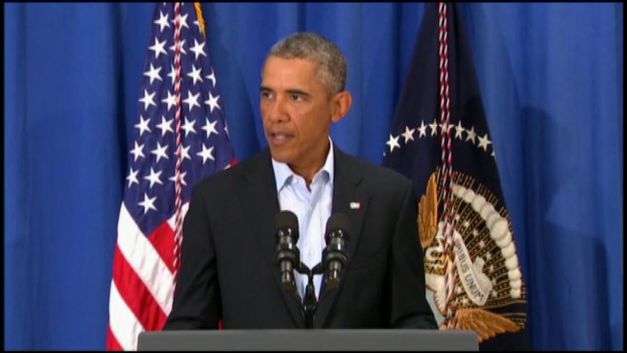 President Barack Obama said the beheading of a U.S. journalist by Islamic radicals won’t deter him from a bombing campaign aimed at halting their advances.

“The United States of America will continue to do what we must do to protect our people,” he said today. “We will be vigilant, and we will be relentless.”

Obama spoke a day after Islamic State militants who have seized parts of Syriaand Iraq posted a video on the Internet showing the beheading of journalist James Foley. They vowed to kill a second if Obama didn’t halt U.S. airstrikes — a threat Obama didn’t mention in his statement.

Instead, Obama said “the entire world is appalled” and must “extract this cancer so that it does not spread.”

The video, which the White House today confirmed is authentic, shows Foley reading a statement blaming Obama for the airstrikes before he’s killed. The second man, identified as journalist Steven Sotloff, is shown at the end of the video.

“The life of this American citizen, Obama, depends on your next decision,” a black-masked militant with a British accent says in the video.

Obama, who interrupted his vacation on Martha’s Vineyard in Massachusetts to speak to reporters, said he called Foley’s parents today to offer condolences.

“No God would stand for” what the terrorists did, he said, and the Islamic State’s claim to be religious is belied by its slaughter of fellow Muslims.

On a website maintained by supporters of the Foley family,freejamesfoley.org, a message posted last night from the journalist’s mother, Diane Foley, spoke of his death.

“We have never been prouder of our son Jim,” the message said. “He gave his life trying to expose the world to the suffering of the Syrian people. We implore the kidnappers to spare the lives of the remaining hostages.”

The gruesome video shows Foley kneeling in an orange jumpsuit next to the terrorist and ends with his severed head lying on his decapitated corpse. Social-networking companies including Twitter Inc. (TWTR) worked to remove the video from their sites.

“We have been and are actively suspending accounts as we discover them,” Dick Costolo, chief executive officer of San Francisco-based Twitter, said in a posting.

Foley was kidnapped in Binesh, Syria, on Nov. 22, 2012, the Federal Bureau of Investigationsaid in a notice posted on its website. It said the 40-year-old freelance photo journalist was “taken by an organized gang after departing from an Internet cafe.” A translator Foley had hired also was taken, but later released, it said.

The eldest of five children, Foley reported from the Middle Eastfor five years, according to the freejamesfoley website, which has been maintained by supporters of his family. Foley, from Rochester, New Hampshire, freelanced for news organizations including Agence France-Presse and Global Post.

Sotloff, who is from Miami, had worked as a journalist in Libya and speaks fluent Arabic, according to a former colleague. He was kidnapped near Aleppo, Syria, on Aug. 4, 2013. He had reported for publications including Time magazine and the Christian Science Monitor.

In London, U.K. Prime Minister David Cameron said today in London that “we have not identified the individual responsible in the video, but it looks increasingly like it is British citizen” who beheaded Foley. U.K. intelligence estimates that 200 of its citizens have joined Islamic State, Cameron said in a BBC interview.

“We will stick to the foreign policy and the very clear strategy that we have,” including making sure that Iraqi Kurds fighting the Islamic State have the arms they need, Cameron said in a televised address.

The video displays the brutality of a group so extreme it’s been disowned by the core al-Qaeda terror organization.

It risks backfiring in Iraq, and might help Obama make a case to the American public for an expanded offensive against Islamic State militants, said John Nagl, a former Army commander in Iraq who helped write a counterinsurgency field manual for the U.S. Army and Marine Corps.

“These guys are not making smart choices,” Nagl, a board member of the Center for a New American Security in Washington, said in an interview. “It may appeal to their base, but it’s not going to win a plurality in Iraq.”

It may also help spur a new Sunni Awakening against the Islamic State, he said, referring to the battle some U.S.-backed Iraqi Sunni tribes fought against al-Qaeda in Iraq, a predecessor group.

Obama authorized the airstrikes on the Sunni militants of the Islamic State fighters this month as the militants pressed their advance across Iraqi territory. Obama said he was acting to protect American military and diplomatic personnel in the northern Iraqi city of Erbil and to break a siege that had trapped thousands of Yezidi civilians on a mountaintop.

He said this week the U.S. would keep up “limited” airstrikes against Islamic State positions, after the bombing stopped the radicals’ advance on Erbil and helped Iraqi and Kurdish forces recapture a key dam at Mosul.