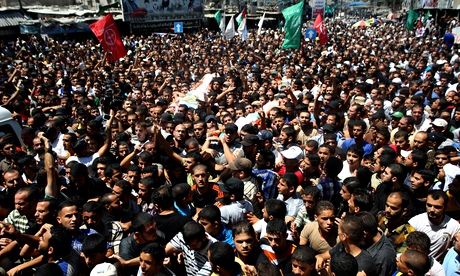 Islamist group confirms loss of senior figures, while confusion remains over fate of its military chief after air strike on Tuesday

Israel dealt a blow to Hamas on Thursday by killing three of its most senior military commanders as uncertainty continued over the fate of the organisation’s top military chief, Mohammed Deif, whose wife and children died in an air strike on Tuesday.

Hamas announced the deaths of Mohammed Abu Shamlah, Raed Attar and Mohammed Barhoum after a house in Rafah, in the south of Gaza, was demolished by a series of missiles. Five civilians were also killed, and at least 40 injured.

A joint statement from the Israel Defence Forces and the internal security agency Shin Bet said that Abu Shamlah and Attar had been killed, but made no mention of Barhoum. Defence minister Moshe Ya’alon said the assassinations were a “great operational and intelligence achievement”.

It was unclear how Hamas’s military command structure would be affected by the losses, but rockets continued to be launched from Gaza throughout Thursday and Hamas spokesman Sami Abu Zuhri said Israel’s actions would “not succeed in breaking the will of our people or weaken the resistance”. Israel would “pay the price”, he added.