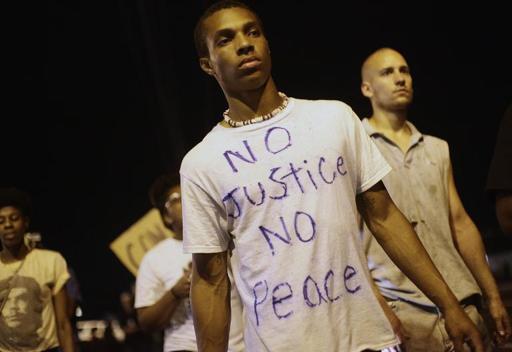 Protests in the strife-torn town of Ferguson cooled late Wednesday after the top US law enforcement official pledged a full investigation into the slaying of teenager Michael Brown that kicked off days of racially charged unrest.

Police said six people were arrested, down from 47 on Tuesday, and that demonstrators refrained from throwing projectiles and firing weapons as they had in the worst moments of the rioting in this St. Louis suburb.

Earlier Wednesday Attorney General Eric Holder met with the parents of Brown, a black unarmed 18-year-old who was shot dead by a white police officer on August 9.

Holder promised the family in a private meeting there would be a “fair and independent” inquiry into the death of their son.

Before the meeting, Brown’s mother viewed her son’s body at a local morgue for the first time since he died after being shot six times.

A grand jury was to begin hearing witnesses to Brown’s killing, with widespread calls for the police officer to be put on trial for the fatal shooting.

The attorney general, who is African-American, told Ferguson residents he had assigned the justice department’s “most experienced agents and prosecutors” to investigate Brown’s death, amid local suspicion that police will protect one of their own.

Police say that Brown was rushing at the officer, but other witnesses say the teen — who was about to start vocational college — had his hands up, ready to surrender.

Holder said he hoped his visit “will have a calming influence on the area.”

When Holder met with students at the local community college where Brown planned to study, he told them that “the eyes of the nation and the world are watching Ferguson right now … because the issues raised by the shooting of Michael Brown predate this incident. This is something that has a history to it and the history simmers beneath the surface in more communities than just Ferguson.”

Molyric Welch, 27, one of the students who met Holder, said her 31-year-old brother had died of cardiac arrest after Ferguson police had allegedly shot him with a stun gun in 2011.

“A lot has happened here,” Welch said, adding that Holder had promised her “things were going to change.”

As Holder met with locals, police said that one of its officers was suspended after pointing a semi-automatic assault rifle late Tuesday at a peaceful protester following a “verbal exchange”.

Video posted on YouTube and aired on TV shows the officer using foul language as he appears to say: “I will (expletive) kill you. Get back.” When the protester asks his name, the response is: “Go (expletive) yourself.”

At this time “a St. Louis County police sergeant walked over and immediately took action, forcing the officer to lower the weapon, and escorting him away from the area.”

The Ferguson security command “strongly feel these actions are inappropriate, and not indicative of the officers who have worked daily to keep the peace.”

At sunset Wednesday, pastors, priests, a rabbi and an imam led more than 100 people, including many white St. Louis locals, on a march to demand justice for Brown.

“We want due process,” said Heather Arcovitch, the senior pastor at the First Congregational Church of St. Louis, speaking to the crowd through a bullhorn.

“This is not a Ferguson problem. This is an American problem and all Americans have to be part of the solution.”