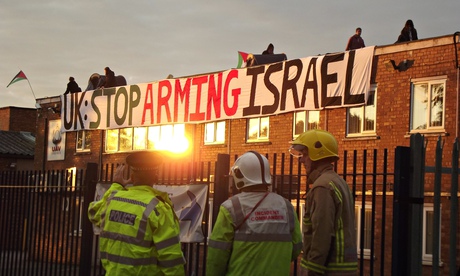 David Cameron’s government has blood on its hands over Gaza. We had to act

Even if and when a full arms embargo is imposed on Israel, this alone will not be enough – a boycott and sanctions are needed

Two weeks ago, nine of us from the London Palestine Action network travelled to the village of Shenstone in Staffordshire and occupied the roof of an Israeli-owned drone engine factory. We closed the factory down for two days before being arrested.

The factory is owned by Elbit Systems, Israel’s largest weapons company, and manufactures engines for a type of drone called Hermes, which has, according to Human Rights Watch, been used in attacks that killed Palestinian civilians and in incidents that may have been war crimes.

The factory is also a fundamental part of the Watchkeeper programme, under which Elbit Systems is leading production of a new generation of drones for the UK military that is modelled on the Hermes drone. Elbit uses the murderous impact of its weapons for profit, marketing the drones as “field-tested” – in other words, proven to successfully kill Palestinians with nowhere to run. The UK government is importing technology that has been developed through the course of Israel’s military operations against Gaza.