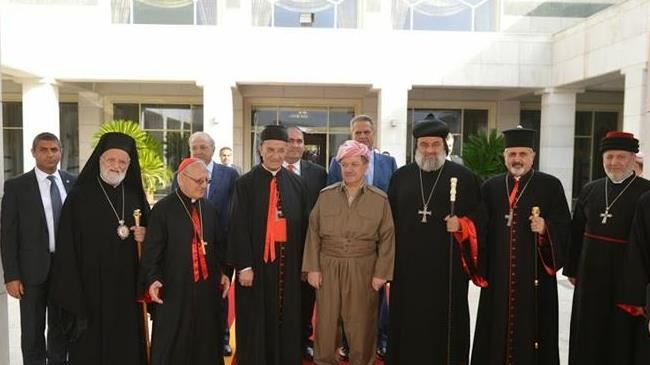 Top Levantine Christian figures have condemned crimes committed by the ISIL Takfiri group against Christians and other minorities in Iraq, Press TV reports.

Headed by the Maronite Patriarch of Antioch Cardinal Mar Bechara Boutros al-Rahi, a delegation of Eastern Patriarchs visited the Iraqi city of Erbil on Wednesday in support of Christians and other minorities in Iraq who are facing persecution by the ISIL Takfiri militants.

The delegation included the Melkite Greek, Syriac Catholic, and Syriac Orthodox Patriarchs of Antionch as well.

They met with senior Kurdish officials, including the president of Iraq’s semi-autonomous Kurdistan Region Masoud Barzani, and the head of the Chaldean Catholic Church, Patriarch Louis Raphael I Sako.

The head of the delegation criticized international and Arab states for standing idle and showing no support for the plight of Christians in Iraq.

“We are here to declare our solidarity with our Christian brothers who have been forced out of their homes. You must not think about migration. You must stay in your country and preserve your roots in land,” the head of the delegation said.

“We also here to call on the international community to not stand arms crossed watching the threats of the ISIL [group] grow,” he added.

The delegation also paid a surprise drop-by to some of the Christian refugees who were forced to seek shelter in the suburbs of Erbil.

“We are here to express solidarity with all the people who have been weakened in this country,” Gregory III Laham, patriarch of Antioch and leader of the Melkite Greek Catholic Church, said.

The top figures slammed the Takfiri militants vandalizing Christian churches as well as their abducting and brutally killing innocent people in Iraq.

Iraq has faced brutal violence by ISIL across the country’s north and west since early June. The crisis has deteriorated in recent weeks, as the militants have swept over new towns in the north, forcing members of the minorities out of their homes.

The ISIL terrorists have been committing heinous crimes in the areas they have taken, including the mass execution of civilians as well as Iraqi army troops and officers.

The Iraqi army is engaged in fierce fighting with the ISIL militants to push them out of the captured areas.

Iraq crisis, Islamic State of Iraq and the Levant (ISIL), Levantine Christian figures, Press Tv, Quoted, Takfiri groups August 21, 2014
In raid to save Foley and other hostages, U.S. found none
David Cameron’s government has blood on its hands over Gaza. We had to act