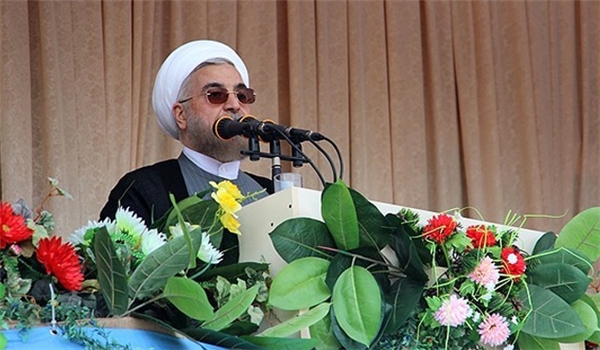 TEHRAN (FNA)- Iranian President Hassan Rouhani renewed Tehran’s support for the oppressed people of the world, specially Iraqis, Palestinians and Syrians, and strongly criticized the Israeli regime for its savage attacks against the Palestinians in the Gaza Strip.

“Today the people of Iraq, Palestine, Syria and many other Muslim nations are waiting help from the Iranians and we should aid our brothers,” President Rouhani said, addressing a large group of people in the Northwestern city of Ardebil on Wednesday.

Last month, Supreme Leader of the Islamic Revolution Ayatollah Seyed Ali Khamenei strongly condemned the recent Israeli attacks on the Palestinians, and underlined that Palestinians should continue their armed struggle against Tel Aviv.

“The armed resistance by the Palestinians is the only way to confront Israel,” Ayatollah Khamenei said addressing a group of Iranian university students in Tehran.

The Iranian Supreme Leader noted that criminal acts of wolfish, child-killer Zionist regime in Gaza have revealed its true nature, and said, “Only way to solve this problem is full annihilation and destruction of the Zionist regime.

“We should realize that the truth and reality of the United States is manifested in this approach, and the Iranian nation, too, will show in the International Quds Day with its huge and roaring demonstrations that they are the supporters of the oppressed and the enemies of the oppressors,” added Ayatollah Khamenei.

“The only way to establish peace and tranquility in Iraq is through respecting the constitution and forging unity,” Shamkhani told reporters.

He noted that the Iranian government and nation will use all their capacities to help establish sustainable security in Iraq.

In July, Iranian Parliament Speaker Ali Larijani underlined that the world powers should respect the Syrian people’s choice for their presidency and stop supporting the terrorist groups active in the Arab country.

“The world powers should accept the Syrian people’s votes and avoid confrontation with the Syrian nation,” Larijani said in a meeting with his Syrian counterpart Mohammad Jihad al-Laham in Tehran.

He referred to the present situation in the region, and said, “Those countries which supported the terrorists in Syria are now concerned about their situation due to the spread of the conflicts to Iraq.”