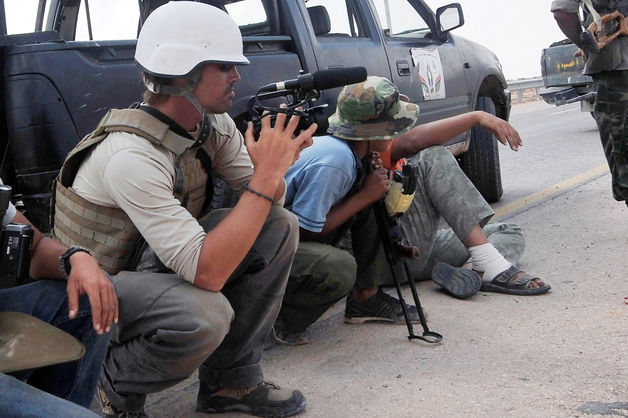 Photographer: Aris Messinis/AFP via Getty Images
A photo taken on Sept. 29, 2011 shows U.S. freelance reporter James Foley, left, on the highway between the airport and the West Gate of Sirte, Libya.

Islamic militants released a video showing the beheading of a man they said was kidnapped U.S. journalist James Foley and threatened to kill a second American unless President Barack Obama calls off airstrikes on Iraq.

The intelligence community is working to determine the authenticity of the footage, U.S. National Security Council spokeswoman Caitlin Hayden said in a statement. Two U.S. officials investigating the case, who asked not to be named as the probe into the video continued, said last night that they believe Foley was the victim.

“We have seen a video that purports to be the murder of U.S. citizen James Foley by ISIL,” said Hayden, referring to the Islamic State, which has seized a swath of Iraq and Syria. “If genuine, we are appalled by the brutal murder of an innocent American journalist, and we express our deepest condolences to his family and friends.”

The video, which ends with the threat to kill a second U.S. citizen if the air strikes continue against Islamic State, displays the brutality of a group so extreme it’s been disowned by the core al-Qaeda terror organization.

It risks backfiring in Iraq, and might help Obama make a case to the American public for an expanded offensive against Islamic State militants, said John Nagl, a former Army commander in Iraq who helped write a counterinsurgency field manual for the U.S. Army and Marine Corps.

“These guys are not making smart choices,” Nagl, a board member of the Center for a New American Security in Washington, said in an interview. “It may appeal to their base, but it’s not going to win a plurality in Iraq.” It may also help spur a new Sunni Awakening against the Islamic State, he said, referring to the battle some U.S.-backed Iraqi Sunni tribes fought against al-Qaeda in Iraq, a predecessor group.

On a website maintained by supporters of the Foley family, freejamesfoley.org, a message posted last night and identified as from the journalist’s mother, Diane Foley, spoke of his death.

“We have never been prouder of our son Jim,” the message said. “He gave his life trying to expose the world to the suffering of the Syrian people. We implore the kidnappers to spare the lives of the remaining hostages. Like Jim, they are innocents. They have no control over American government policy in Iraq, Syria or anywhere in the world.”

The video begins with a clip of Obama announcing U.S. military action in Iraq. Then it shows an unidentified masked man in a desert setting dressed in black wielding a knife in one hand beside the man identified as Foley, who is on his knees clad in an orange jumpsuit similar to those worn by detainees held by the U.S. at Guantanamo Bay, Cuba.

In clear, American-accented English, the man identified as Foley addresses his brother John, who he says is in the U.S. Air Force.

“When your people dropped that bomb on those people, they signed my death certificate,” the man says.

The graphic video shows the man in black pulling the American’s head back and slicing his neck, then cuts away to the man’s severed head lying on his decapitated corpse. A separate social media post shows pictures of what appears to be the same man kneeling and of his decapitated head and body.

At the end of the video, a second American, also clad in orange, is shown alongside the terrorist.

“The life of this American citizen, Obama, depends on your next decision,” the militant says in a British accent.

The president, while flying back to vacation yesterday from Washington to Martha’s Vineyard, Massachusetts, was briefed on the video by his deputy national security adviser, Ben Rhodes, said spokesman Eric Schultz.

The militant “appears to have been a British person,” U.K. Foreign Secretary Philip Hammond said today on BBC Radio 4. “We will have to do some more analysis to make sure that’s the case.” The events in Iraq are a threat to the U.K.’s national security, said Hammond. “We have been saying for some time that there are significant numbers of British nationals in Syria an Iraq,” he said.

Foley was kidnapped in Binesh, Syria, on Nov. 22, 2012, the Federal Bureau of Investigation said in a notice posted on its website. It said the 40-year-old freelance photo journalist was “taken by an organized gang after departing from an Internet cafe.” A translator Foley had hired also was taken, but later released, it said.

The eldest of five children, Foley reported from the Middle East for five years, according to the freejamesfoley website, which has been maintained by supporters of his family. Foley, from Rochester, New Hampshire, freelanced for news organizations including Agence France-Presse and Global Post.

The video “doesn’t change the equation” in terms of its possible effect on the renewed U.S. military involvement in Iraq, said Nagl. “It’s just one more example of how barbaric and uncivilized these guys are.”

Obama authorized airstrikes in Iraq earlier this month against the Islamic State, the first direct intervention by the U.S. military in the country since the withdrawal of all troops in late 2011.

The Washington-based National Press Club, in a statement last night, expressed “profound sorrow at the apparent death” of Foley, and praised him as “an extraordinary and brave photographer who sacrificed his personal safety to inform the world about the war in Syria.”

More than 170,000 people have died and more than 10 million have fled their homes since the civil war that seeks to oust Syrian President Bashar al-Assad broke out in March 2011.