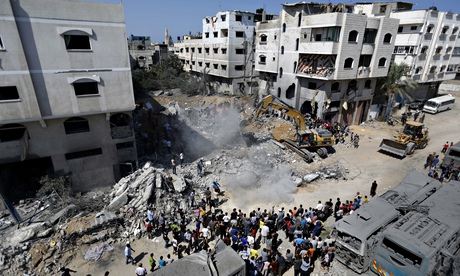 The scene of the air strike that killed the wife and child of the Hamas military chief Mohammed Deif in Gaza. Photograph: Mohammed Abed/AFP/Getty Images

Fate of Mohammed Deif unknown after family killed in Israeli air strike, as conflict resumes after breakdown of peace talks

Hundreds of Palestinians turned out on Wednesday for the funeral of the wife and son of the Hamas military chief Mohammed Deif, who were killed overnight in an Israeli air strike on a house in Gaza City.

Hamas had urged Gazans to turn out in force for the funeral in Jabaliya refugee camp, after an attack which left at least one other Palestinian dead and injured a further 15 people. There were fears that there could be more bodies under the rubble.

The fate of Deif, one of Hamas’s most senior figures who has survived Israeli attempts on his life in the past, is still unknown.

Israel called up 2,000 reserves on Wednesday, a day after the breakdown of peace talks in Cairo that aimed to bring an end to a six-week war with Palestinian militants in Gaza.