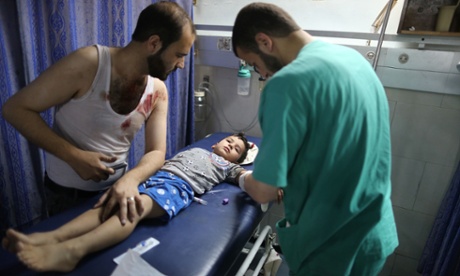 A boy is treated at al-Shifa hospital in Gaza after Israeli air strikes. Photograph: Xinhua/Landov/Barcroft Media

The conflict in Gaza has flared up with renewed rocket fire and air strikes as talks in Cairo aimed at forging a durable ceasefire in the six-week war broke down.

A woman and a two-year-old boy – reported to be the wife and child of Mohammed Deif, Hamas’s military chief, whom Israel has wanted to eliminate for years – died in an air strike on a house in Gaza City on Tuesday evening. A third unidentified person was also killed and at least 15 people injured.

Hamas said the strike was an attempt to assassinate Deif and said Israel had opened a “gateway to hell”.