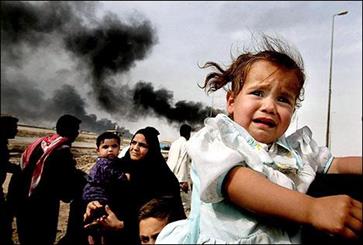 TEHRAN, Aug. 19 (MNA) – Amidst an expanding displacement crisis in Iraq, several United Nations humanitarian organizations are scaling up efforts to get food and water to people fleeing attacks by the ISIL.

The Iraqi authorities have requested the assistance of the UN Mission in Iraq (UNAMI) in lifting the siege on Amirli and providing humanitarian relief to the area. The UN has been seeking a way to get food to the area but insecurity is affecting access to assess the situation and deliver aid.

In the meantime, the United Nations Children’s Fund (UNICEF) said that aid organizations are working to improve conditions for Iraqi refugees arriving in Syria. Several thousand children are among an estimated 12,000 Iraqi refugees now sheltering at a camp in Syria after crossing the remote border between the two countries.

UNICEF says conditions have steadily improved, but there are still concerns about the risk of waterborne diseases due to poor sanitary conditions, especially in the current extreme heat. It has delivered more than 3,000 water purification tablets together with other lifesaving supplies at the Nawrouz camp in Syria hosting Iraqi refugees.

The number of people displaced by the fighting in Iraq is at least 600,000, according to the United Nations.

The UN Refugee Agency said on Monday some 24,000 of them live in one village called Sharyia on the outskirts of Dahuk.

They include young children housed in schools and unfinished buildings. Each day, displaced Iraqi children and adults queue for rice and soup distributed by the World Food Programme.

Tens of thousands of Yazidis fled earlier this month when the Islamic State group captured the town of Sinjar, near the Syrian border.