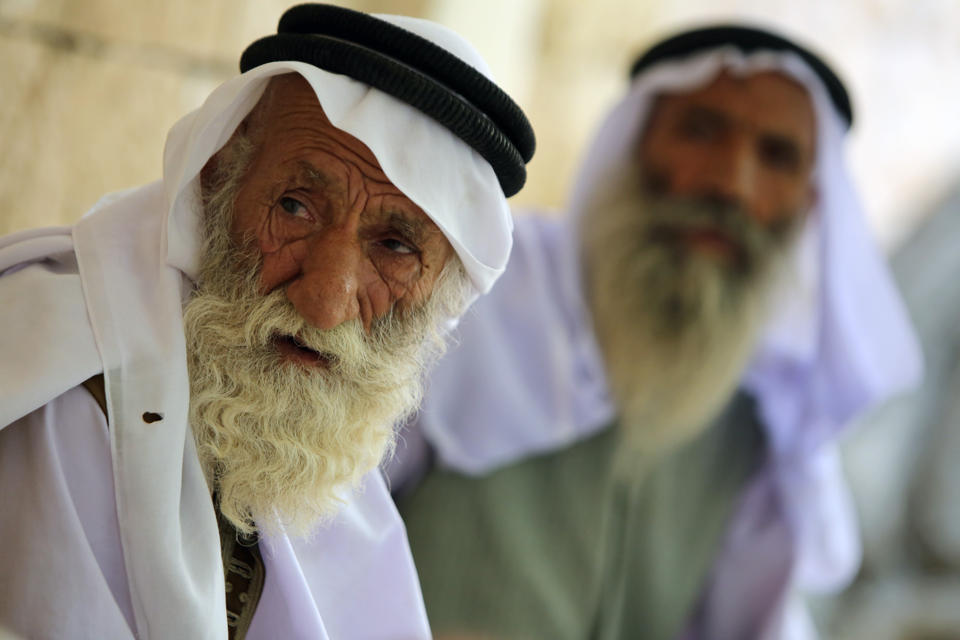 An Iraqi cleric from the Yazidi religious minority looks on, on August 17, 2014 at Yazidi holy Lalish temple situated in a valley in the Shikhan Mountains, in Kurdistan’s western Dohuk province (AFP Photo/Ahmad al-Rubaye)

Geneva (AFP) – The UN refugee agency said Tuesday it was poised to mount a massive aid operation for 500,000 Iraqis driven from their homes by jihadist rebels.

“In response to the deteriorating situation in northern Iraq, UNHCR is this week launching one of its largest aid pushes aimed at helping close to half a million people who have been forced to leave their homes,” spokesman Adrian Edwards told reporters.

Jihadist fighters from the Islamic State group which had already occupied parts of Syria launched an offensive in Iraq on June 9 and soon took over much of the country’s Sunni heartland.

The jihadists, who have declared a “caliphate” in a region straddling the Iraq-Syria border, have brought Iraq to the brink of breakup.

The United Nations estimates that 1.2 million Iraqis have been displaced by fighting this year, Edwards said ahead of the extraordinary aid push set to begin Wednesday.

“Barring last-minute delays, an air, road and sea operation will begin tomorrow, starting with a four-day airlift using Boeing 747s from Aqaba in Jordan to Arbil, followed by road convoys from Turkey and Jordan, and sea and land shipments from Dubai via Iran over the next 10 days,” he said.

He said a range of countries, including Saudi Arabia, the United States, Britain and Norway, along with Swedish furniture giant Ikea were helping provide the supplies.

UNHCR is also working closely with regional authorities in Iraq’s Kurdistan Region, where at least half of the displaced have found a haven.

At least 200,000 people have flooded into Kurdistan since the beginning of the month, when jihadists seized the city of Sinjar and neighbouring areas, according to UN numbers.

The militants’ advance prompted tens of thousands of people, many of them religious minority Yazidis, to take refuge in the mountains.

They remained under siege with little food and water for more than 10 days until Kurdish fighters on the ground and US air strikes eventually enabled most of them to escape.

“Iraq’s current humanitarian challenges are immense,” Edwards said, adding that a key goal was to help those who lack shelter or housing.

“We have to start with the most vulnerable and then expand from there,” he said.

He pointed out that many of the displaced were “still coming to grips with the tragedy they’ve been through in recent weeks — fleeing homes with nothing, and many trying to cope with the loss of loved ones.”

“This is a major humanitarian crisis and disaster and it continues to affect very large numbers of people,” he said, stressing that “very much more aid is going to be needed over the next weeks.”

There are currently eight camps in the Dohuk and Erbil governorates that are open or on the verge of opening in the coming days, he said.

Another four to six sites were also being planned in the area, which should allow the camps to house a total of 140,000 people.

UNHCR had also set up camps for displaced people elsewhere in Iraq, and was working to help thousands of religious minority Yazidis who have fled into war-ravaged Syria to escape the jihadist offensive, Edwards said.

Some 8,000 Yazidis were crowded into the Newroz camp, 60 kilometres from the Iraqi border, while another 3,000 had moved into Yazidi villages in Syria, he said.