Obama says U.S. to keep up airstrikes to halt militants 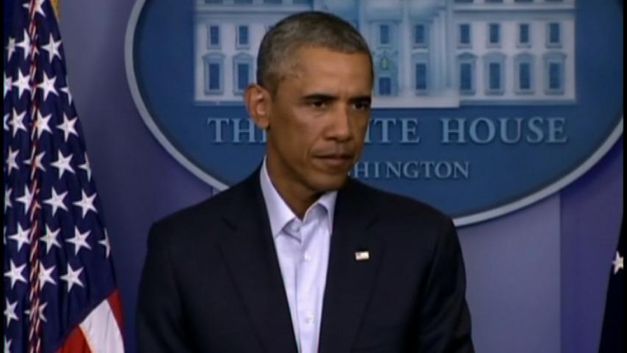 Aug. 18 (Bloomberg) — U.S. President Barack Obama speaks about his decision to send Attorney General Eric Holder to Ferguson, Missouri, to meet with federal and local authorities where the shooting of an unarmed black teenager by police has sparked days of protests and violence. Obama, speaking at the White House, also discusses U.S. airstrikes in Iraq. against Islamic State militants. (Source: Bloomberg)

President Barack Obama said the U.S. will continue “limited” airstrikes against Islamic State militants, which have stopped their advance on the city of Erbil and helped Iraqi and Kurdish forces recapture a key dam at Mosul.

The U.S. approach has led to “important progress” against the insurgents, Obama said yesterday at the White House. He said the U.S. is working to pull together an international coalition to support humanitarian relief in northern Iraq.

Obama, who pressured former Iraqi Prime Minister Nouri Al-Maliki to step down, is seeking quick appointment of a new Iraqi government under Prime Minister-Designate Haidar Al-Abadi as a stabilizing step for the region for both Iraq and Syria.

The future of Iraq depends on formation of a “credible Iraqi government,” he said. “They’ve got to get this done because the wolf’s at the door.”

Obama spoke after meeting with Vice President Joe Biden and members of the White House National Security Council on Iraq. Obama flew back to Washington yesterday for two days at the White House in the middle of a two-week vacation on Martha’s Vineyard.

Over the previous three days, the U.S. conducted 35 air strikes against Islamic State militants near the Mosul dam, according to a statement yesterday from Rear Admiral John Kirby, a Pentagon spokesman. The attacks involved fighter, bomber and drone aircraft.

Kurdish and Iraqi forces regained control of the dam, Iraq’s largest, from Islamic State Sunni-Muslim insurgents yesterday. Kurdish forces, known as the peshmerga, have forced militants from the dam and now need to clear a 2 kilometer stretch of mines and bombs, said Halogard Hikmat, a Kurdish peshmerga military official.

Obama said a breach of the dam would be “catastrophic.”

Islamic State fighters had taken the dam using U.S.-made weapons seized from fleeing Iraqi troops. Obama authorized air strikes following the dam seizure and a move toward Erbil, where the U.S. has military and diplomatic personnel based.

The militants retain control of oil infrastructure in Iraq and eastern Syria, funding their self-proclaimed caliphate, or state based on the group’s hard-line interpretation of Islamic law, with the revenue.

News that the dam had been retaken help push oil prices down with Brent for October settlement sliding $1.93, or 1.9 percent, to $101.60 a barrel on the London-based ICE Futures Europe exchange. That was the lowest close since June 26, 2013.

Four U.S. officials, all speaking on the condition of anonymity because intelligence on Iraq is classified, said that recapturing the Mosul dam is unlikely to produce the momentum needed to defeat Islamic State in other areas of Iraq.

The Kurdish peshmerga who retook the dam are already stretched thin defending their territory, including the city of Kirkuk and its oil field.