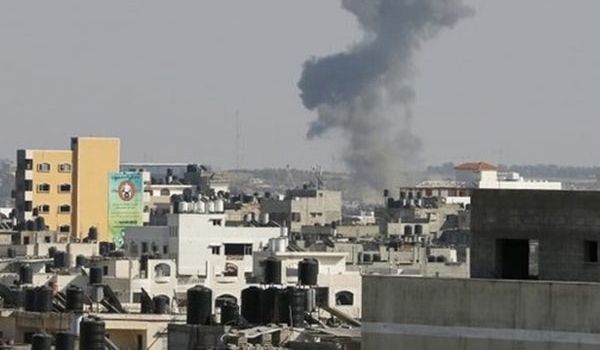 TEHRAN (FNA)- The Israeli army resumed airstrikes on Gaza Tuesday afternoon, hours before a ceasefire was set to expire.

Israeli military officials claimed that they have been targeted by three Palestinian rockets and used the unsubstantiated allegation as an excuse to target residential areas in the Gaza Strip again.

“Terror targets” were hit after three rockets were fired towards the towns of Beersheba and Netivot, Israeli army officials said.

A five-day ceasefire was extended for 24 hours at midnight while delegations from both sides tried to negotiate a deal to end weeks of fighting.

More than 2,016 Palestinians, most of them women and children, have died since 8 July when Israel started a new wave of airstrikes on Gaza which was later joined by a ground offensive on July 17.

None of the Palestinian factions in Gaza, which is dominated by the Hamas Movement, has confirmed the alleged rocket attack.

A senior Israeli official told the BBC that the Israeli delegation had been instructed to leave the indirect talks and return to Israel after the attack.

A senior member of Palestinian Authority President Mahmoud Abbas’s Fatah movement earlier said there had been “no progress on any point” in the negotiations and that the “circle of violence” might continue.

Palestinian negotiators said Israel was seeking guarantees that Hamas and other factions in Gaza would be disarmed, while the Palestinians were demanding an end to the Israeli and Egyptian blockades of Gaza.

Hamas has stated that it will not give up its weapons, while Israel has said it needs to maintain some control over Gaza’s crossings to prevent the smuggling of weapons.

The Palestinian health ministry says that 2,016 Palestinians have been killed since it began, including 541 children and 250 women.

The Israeli authorities say 64 Israeli soldiers have been killed, along with two Israeli civilians and a Thai national.