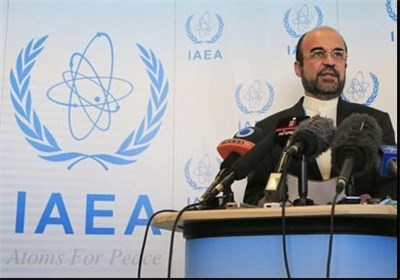 Iran cooperates with IAEA only on “rational” issues

TEHRAN (Tasnim) – Iran’s envoy to the International Atomic Energy Agency (IAEA) said the country would cooperate with the agency only on “rational issues” to resolve the ambiguities over its peaceful nuclear energy program.

“From our point of view, the allegations are all baseless. The IAEA has not released a single document so far. In fact there is no document at all, but a bunch of information provided by Western intelligence agencies which has no basis. We are trying to refute such allegations one by one while sticking to our principles. We have managed to reasonably convince the Agency that the explosive detonators have been used for peaceful purposes in Iran”, said Reza Najafi.

Earlier, the IAEA had refused to close its investigation of the issue of high explosives detonators. The Agency had reported that Iran had provided documents that it had used exploding bridge-wire (EBW) experiments in petroleum industry.

Najafi further added that following the IAEA’s refusal to close investigations on detonators issue, Iran suspended the 5 steps out of the 7 steps earlier agreed upon.

He emphasized that in order to resolve the ambiguities, the Islamic Republic of Iran is seeking the foreign policy of constructive interaction, adding that such constructive policy with countries and international organizations should be practical.

In February, Iran voluntarily agreed to implement seven new practical measures by May 15 to allay concerns regarding its nuclear activities.

Iran, a signatory to the Non-Proliferation Treaty, considers nuclear enrichment an inalienable right, and has on numerous occasions reiterated that it wants nuclear energy for purely peaceful purposes.