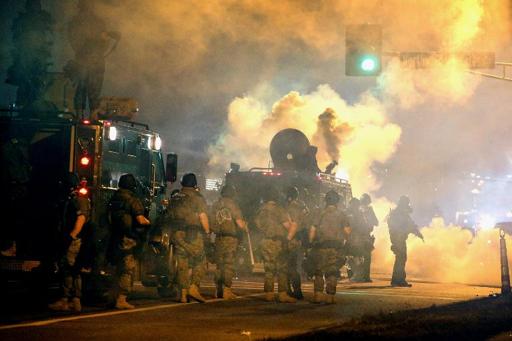 Dozens arrested in Ferguson after night of violence

Police attempt to control demonstrators in Ferguson, Missouri on August 18, 2014.

Protesters in Ferguson shot at police and threw rocks and Molotov cocktails in a new spasm of violence late Monday in the St Louis suburb that left six wounded and led to 31 arrests, police said.

Police responded with tear gas to disperse the crowd of about 200 in the town, Captain Ron Johnson of the Missouri Highway Patrol said early Tuesday. He said police showed restraint and did not open fire.

Johnson said two demonstrators and four officers were injured in the fresh unrest that has shaken Ferguson after a white police officer shot dead a black teenager, unleashing a new debate over police treatment of minorities in the United States.

Unarmed 18-year-old Michael Brown was killed in broad daylight on a residential street by Darren Wilson, a 28-year-old white police officer, on August 9.

Monday’s demonstration over the killing started peacefully, only hours after President Barack Obama, interrupting his summer vacation, made a national televised appeal for calm.

But Johnson told a news conference that a loud albeit peaceful group of about 200 then started moving toward the police and a small minority among them attacked officers in riot gear.

“There is a dangerous dynamic in the night,” Johnson said. “It allows a small number of violent agitators to hide in the crowd and then attempt to create chaos.”

He added: “Our officers came under heavy gunfire.”

Johnson stood behind a table on which a gun and a Molotov cocktail he said had been seized from protesters were on display.

Some of those in the crowd were not locals but rather people from as far away as New York and California, he said. The news conference began with a prayer for peace led by a county chaplain.

“Protesters are peaceful and respectful. Protesters don’t clash with police,” Johnson said. “It is criminals who throw Molotov cocktails and fire shots that endanger lives and property.”

US National Guard troops had rolled into Ferguson earlier in the day, but they kept a low profile as police in riot gear dispersed the demonstrators around 11:00 pm (0400 GMT).

Obama, the nation’s first African-American president, said he was sending Attorney General Eric Holder to Ferguson on Wednesday as Washington launches a civil rights investigation into the case.

Obama said there was no excuse for local police to use “excessive force” and urged the state of Missouri to make only “limited” use of the National Guard, which is operating under the supervision of Johnson and the Missouri Highway Patrol.

The reinforcements allowed State Governor Jay Nixon to lift an overnight curfew, but tempers were still running high amid controversy over Brown’s death.

“They’re supposed to protect the American citizens, but they’re fighting a war with unarmed citizens,” said black demonstrator Ron Henry, who wore a T-shirt emblazoned with the words “Stop Killing Us.”

Amid the trouble, Getty Images photographer Scott Olson was arrested for unknown reasons, the agency said. He was later released.

Residents were on edge, after the previous night saw rioters loot stores and throw Molotov cocktails.

Johnson urged demonstrators to hold their rallies during the day so that agitators cannot hide among them under cover of darkness.

A forensic pathologist retained by Brown’s family revealed that the student had been shot at least six times — twice in the head.

Different versions of the shooting have emerged, with police sources saying there was a scuffle during which Brown tried to seize the policeman’s weapon, while witnesses have alleged that Brown had his hands up and was not resisting when he was shot.

A total of three autopsies have been requested — by local authorities, the family and the Justice Department.

Officials told news media that a Missouri grand jury could hear evidence in the case as early as Wednesday.

Obama warned of a “gulf of mistrust” between residents and police in many cities and towns across America, particularly in those where racial minorities feel excluded from opportunities for a better life.

“To a community in Ferguson that is rightly hurting and looking for answers, let me call once again for us to seek some understanding rather than simply holler at each other,” he said.

Former New York chief medical examiner Michael Baden, who examined Brown’s body on behalf of his family, said Monday he found no evidence of an alleged struggle between Brown and the officer.

Wilson is said to have been hurt in the incident, and Baden said that he had not examined the police officer.

The absence of gunpowder on Brown’s body indicated that the muzzle of the gun was probably at least a foot or two away — or as much as 30 feet (10 meters) — Baden added.

He stressed that his findings were preliminary.