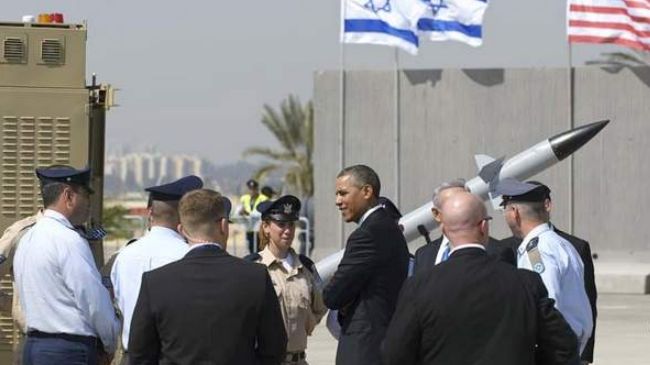 The total American military aid to Israel has amounted to $100 billion since it began in 1962, making the Zionist regime the largest foreign recipient of taxpayer dollars, according to a report.

The largest amount of US aid in a single year came to $15.7 billion in 1979, when Israel signed the peace treaty with Egypt, according to Haaretz.

For the past decades, the United States has been transferring annual aid of about $3 billion to Israel. In recent years the aid has been solely for military purposes.

In addition, the US has been funding many of Israel’s military projects such as the Iron Dome, a system designed to intercept incoming short-range missiles.

Israel has received over $700 million in American funds for the missile system since 2011.

The US Congress approved a $225 million emergency funding package for the Iron Dome early in August as Israeli forces were engaged in a bloody campaign against Palestinians in the Gaza Strip.

The new funding is in addition to the $351 million that is already under discussion for the Iron Dome in fiscal 2015.

Under an existing 10-year aid agreement between Washington and Tel Aviv signed in 2007, $30 billion of American money is flowing to Israel.

Meanwhile, US and Israeli officials have discussed a surge in US military aid in a new package that would extend through 2027.

At a White House press conference on August 1, US President Barack Obama reiterated his support for what he called Israel’s “right to defend itself.”

“Not only have we been supportive of Israel in its right to defend itself, but in very concrete terms — for example, in support for the Iron Dome program that has intercepted rockets that are firing down on Israeli cities — we’ve been trying to cooperate as much as we can to make sure that Israel is able to protect its citizens,” Obama stated.

During the course of Israel’s latest onslaught against Gaza, the US allowed the regime to use an American-owned munitions stockpile consisting of missiles, armored vehicles and artillery ammunition.