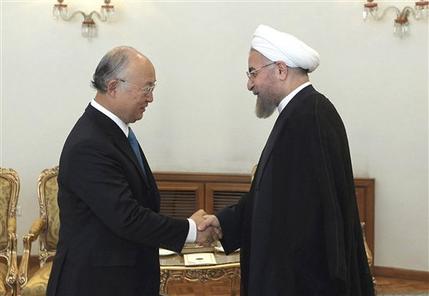 In this photo released by the official website of the office of the Iranian Presidency, Iran’s President Hassan Rouhani, right, shakes hands with Director General of the International Atomic Energy Agency Yukiya Amano at the start of their meeting in Tehran, Iran, Sunday, Aug. 17, 2014. (AP Photo/Mohammad Berno, Iranian Presidency Office)

VIENNA (AP) — Iran is now answering questions about suspicions that it worked secretly on nuclear weapons, The U.N.’s chief nuclear inspector said Monday, but he did not indicate whether he was happy with the responses.

Arriving back from talks in Tehran with Iranian President Hassan Rouhani, Yukiya Amano said that his International Atomic Energy Agency is now in a position to “follow up” its investigation of detonators that could have been used in nuclear-weapons-related work.

He said the IAEA and Iran also are discussing Tehran’s alleged tests of high explosives that could be used in the process of setting off a nuclear charge, and claims that it modeled a nuclear warhead from uranium metal.

Iran has for years dismissed such suspicions as based on forged U.S. and Israeli intelligence.

Amano said his talks were “useful.” But he declined to say whether the Iranian answers were satisfactory or if he considered as progress the mere fact that Tehran now was responding to his experts after seven years of stonewalling them.

While agreeing late last year to respond to the IAEA’s questions, Iran continues to publicly insist that it never worked on such weapons and has no interest in them.

It acknowledged the detonator experiments in May but says they were meant to benefit the oil industry, where such equipment is used for exploration.

Amano said Rouhani and other top officials gave a “firm commitment” of support for his agency’s investigation, which the IAEA hopes to slowly expand to include eight more areas.

The IAEA probe is separate from talks between Iran and six world powers focused on curbing Tehran’s nuclear program in exchange for lifting sanctions. But the United States has said that any overarching nuclear agreement must include assurances from the agency that it was able to complete its investigation to its satisfaction.