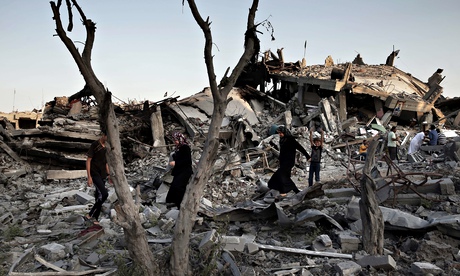 Israeli delegation still pushing for demilitarisation of strip but hoping for extension to truce with Hamas, says military official

The five-day ceasefire between Israel and Palestinian militants in the Gaza Strip expires at midnight, with no firm indications that Egyptian mediators in Cairo have succeeded in securing a deal to end the five-week conflict.

The Israeli prime minister, Binyamin Netanyahu, said on Sunday that Hamas should not expect to achieve a diplomatic victory out of the war, which has left almost 2,000 Palestinians – many of them civilians – 64 Israeli soldiers and three civilians dead.

“From the first day, the Israeli delegation to Cairo has worked under clear instructions: insist on the security needs of the state of Israel. Only if there is a clear response to our security needs will we agree to reach understandings,” he said.