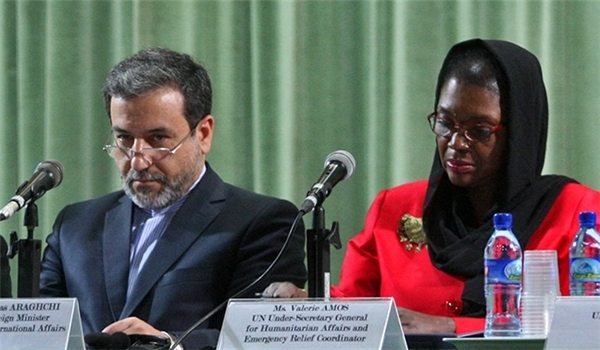 “The Islamic Republic of Iran has done everything in its power for the people of Gaza but unfortunately, our access is limited,” Araqchi said on the sidelines of a ceremony in Tehran to commemorate the World Humanitarian Day on Monday.

Stressing that Tehran has prepared a large amount of humanitarian aids for the Palestinian people and is ready to transfer the wounded Palestinians to Iran for treatment, he said, “Relief efforts in Gaza are mostly made through the UN and the International Red Cross but these aids are meager, considering the Zionists’ different pressures and non-cooperation.”

Araqchi underlined that Iran is still waiting for the Egyptian government’s cooperation to deliver its humanitarian aid cargo to Gaza.

Tehran had also earlier criticized Cairo for delaying delivery of its humanitarian aid to the war-hit Gaza Strip and transferring the wounded Palestinians to Iran, labeling Egypt’s hesitations as “unacceptable”.

“The waiting of the severely-injured Palestinian children and women for over two weeks for being transferred to Iran’s medical centers and the Egyptian foreign ministry’s delay in issuing permission for flights (to transfer the wounded to Iran) is questionable,” Iranian Deputy Foreign Minister for Arab and African Affairs Hossein Amir Abdollahian told FNA on Tuesday.

Noting that requests by Iran’s civil aviation company for landing in Cairo or Ismailia airports have remained unanswered, he said, “Any further delay by Egypt in this fully humanitarian issue is unacceptable.”

His remarks came after Iranian and Egyptian deputy foreign ministers in a meeting in Tehran last Tuesday discussed ways of putting an end to the Israeli crimes and aggressions against the Palestinians in the Gaza Strip, and agreed to run cooperation to alleviate the pains of the besieged people of Gaza.

During the meeting in the Iranian capital, Amir Abdollahian and his Egyptian counterpart Mohammad Badreddin called for an immediate halt to Israel’s massacre of the Gaza people.

The Iranian deputy foreign minister underlined the need for influential efforts by Muslim and Arab countries to stop the massacre of the defenseless people of Gaza and break the siege of the sliver.

Amir Abdollahian expressed the hope that the Egyptian government would cooperate with Iran to help facilitate dispatch of medicine and foodstuff to the war-stricken people in the enclave.

He further hoped that Cairo would also issue the necessary permit for the swift dispatch of the injured Palestinians to Iranian hospitals.

The Egyptian deputy foreign minister, for his part, briefed his Iranian counterpart on the regulations on the dispatch of aid to Gaza via Egypt, and expressed the hope that the two sides could launch the necessary cooperation to deliver Iran’s aid to Gaza to lessen the hardship of the Palestinians in there.

President Rouhani also asked the Iranian Red Crescent Society (IRCS) to harmonize with the Palestinian and Egyptian Red Crescent societies for delivering the Iranian medical aids, medical equipment, physicians as well as relief and rescue workers through the Rafah Passage to the oppressed and injured Palestinians in Gaza.

President Rouhani also asked Foreign Minister Mohammad Javad Zarif to announce Iran’s readiness for curing the injured Palestinians in the Iranian hospitals and to arrange for their safe transfer to Iran for the same purpose.

He expressed the hope that the Egyptian government would help the people of Gaza find access to medicine and the Palestinian patients and injured Gazans, who are mostly children and exposed to serious risks, be transferred to Iran for treatment.

Zarif, however, said that Iran has not received resolute response from the Egyptian side, “although the Egyptian foreign minister has promised twice that he will do his best in this regard and we hope to see results.”

Also in July, Zarif in a telephone conversation with President of the International Committee of the Red Cross (ICRC) Peter Maurer called for all-out efforts to deliver humanitarian aid to war-stricken people in the Gaza Strip.

Over 2,000 Palestinians have so far been killed and some 11,000 others injured since the Israeli military first launched its offensive against the Gaza Strip on July 8.