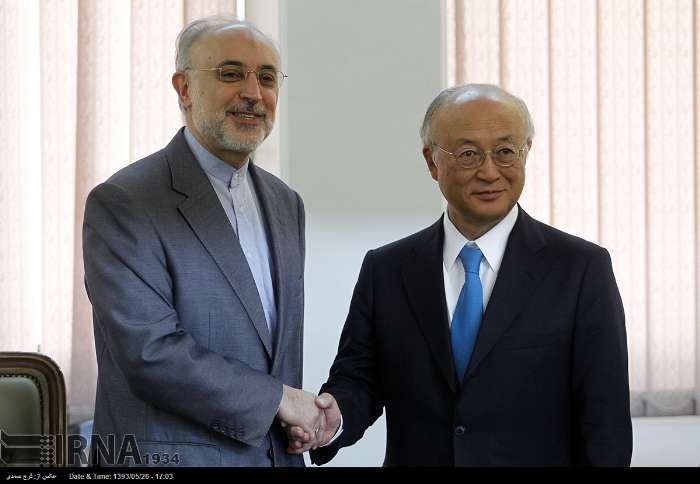 Speaking to reporters after a meeting with IAEA Chief Yukiya Amano in Tehran, Salehi said the meeting focused on the issue of detonators among other topics related to Iran’s peaceful nuclear program.

“In today’s talks with Mr. Amano, the subject to which more emphasis was given was the issue of detonators. That is a broad issue, and today, our friends (Iranian experts) have provided answers to all relevant questions,” Salehi explained.

The Iranian official also hoped that the UN agency chief would “take major steps” to close discussions on the case of EBW detonators gradually, since the talks on the issue are being finalized.

EBW detonators are seen to have the potential for military applications. Iran insists that allegations of any such utility of that device in the country’s nuclear program are baseless, and has offered to help clear up  ambiguities in this regard.

Elsewhere in his remarks, Salehi insisted that the Islamic Republic has completely answered the IAEA’s questions regarding its nuclear energy program.

He noted that Iran has so far met the agency’s demands in two different phases, and the IAEA has also confirmed that in its report.

Earlier, the IAEA confirmed in its latest report that Iran has complied with the interim nuclear accord clinched between Tehran and six world powers in November 2013 over Tehran’s nuclear energy program.

It said the Islamic Republic has eliminated its most sensitive stockpile of enriched uranium gas under the nuclear accord.

In his second visit to Tehran in less than a year, Amano held separate meetings with Iranian President Hassan Rouhani and Foreign Minister Mohammad Javad Zarif earlier in the day.