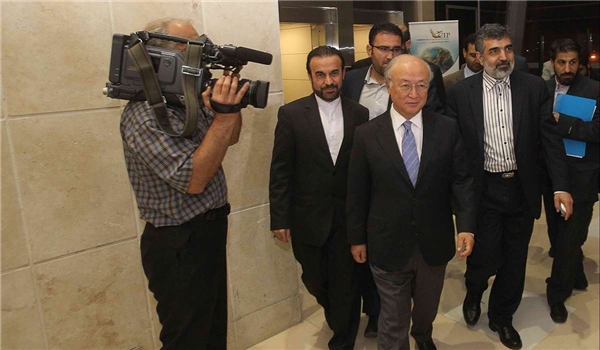 TEHRAN (FNA)- A senior Iranian legislator welcomed the visit by Director General of the International Atomic Energy Agency (IAEA) Yukio Amano to Tehran, and said the trip will help the nuclear talks between Iran and the world powers to come closer to a conclusion.

“Given the fact that the Islamic Republic of Iran does not have a good experience in its ties with the IAEA due to the agency’s lack of transparency in its positions on Iran’s nuclear program and because it usually takes care for the US interests in its reports, this visit can help the results of the nuclear negotiations between Iran and the Group 5+1 (the US, Russia, China, Britain and France plus Germany),” Chairman of the parliament’s National Security and Foreign Policy Commission Alaeddin Boroujerdi said in an interview with the parliament’s news website on Sunday.

“Given Iran’s transparent moves and straightforward positions, Amano is expected to play his role in explaining Iran’s peaceful use of the nuclear technology to the powers,” the senior MP added.

Boroujerdi expressed the hope that Iran and the IAEA would seize the opportunity of this visit to accelerate the process of the nuclear negotiations.

Amano arrived in the Iranian capital on Sunday morning at the head of a high-ranking delegation.

In late July and in its latest report on Iran, the IAEA confirmed Tehran’s commitment to the interim deal it struck with the Group 5+1 in Geneva in late November, 2013.

The IAEA’s report showed that Iran had met the terms of the six-month agreement, under which it limited its atomic activities in exchange for some easing of sanctions.

The discussions between the IAEA and Iran are a separate track of talks from the international negotiations between Iran and six powers on Iran’s future nuclear activities and removal of the western sanctions.

On July 20, the deadline for reaching a final agreement on Iran’s future nuclear activities was postponed by four months—until November 24—to give more time for diplomatic efforts.