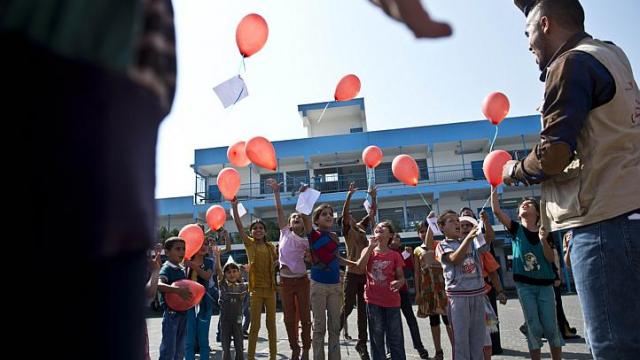 Palestinian children release red helium-filled balloons with notes of good will attached to them during an activity at a UN school in Jabalia in the northern Gaza Strip, where Palestinians who have been displaced by violence in Gaza have sought refuge, on August 17, 2014. UN humanitarian chief Valerie Amos said Sunday it will take months to repair damage to the UN’s infrastructure caused by the Israeli bombardment of Gaza. — PHOTO: AFP

TEHRAN (AFP) – United Nations humanitarian chief Valerie Amos said Sunday on a visit to Iran that it will take months to repair damage to the UN’s infrastructure caused by the Israeli bombardment of Gaza.

“Damage to hospitals, schools and UNRWA shelters where people displaced sought refuge will take months to rebuild,” she said, referring to the United Nations agency for Palestinian refugees.

Amos was speaking to reporters at the start of a two-day visit for talks with Iranian officials on the humanitarian crises wreaked by conflicts in the Gaza Strip, Syria and Iraq.

“The UN response continues including deliveries of food, water and households goods. Medicines and fuel are being delivered to hospitals,” she said.