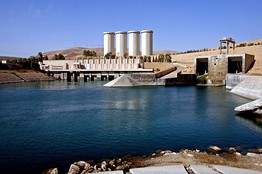 The dam at Mosul, pictured here in 2007, lies 225 miles northwest of Baghdad and has been under control of militants from the group calling itself Islamic state since earlier this month. Associated Press

The U.S. targeted Sunni militants’ positions near Iraq’s largest dam in a sign of the expanding reach of airstrikes designed to push back the Islamic State.

After a week of strikes confined to Erbil and Mount Sinjar, U.S. fighter jets and armed drones struck yesterday near Mosul, Iraq’s second largest city, to help wrest control of the dam seized by Islamic State forces earlier this month.

The combination of Navy F-18 and Air Force F-16 fighters, along with the drones, marked the largest deployment of U.S. aircraft since the strikes began on Aug. 8, according to a U.S. defense official who spoke on condition of anonymity.

The strikes are part of a U.S. effort that President Barack Obama announced to halt the advance of the Sunni insurgency. Militants calling themselves the Islamic State have rampaged through OPEC’s No. 2 oil producer, seizing border posts, beheading foes and targeting dams whose destruction could flood areas near Baghdad and Mosul.

The dam near Mosul is the most important asset the group captured since taking Nineveh province in June. The Islamic State also controls several oil and gas fields in western Iraq and eastern Syria, generating millions of dollars in daily revenue to help fund the caliphate it announced and strengthen its grip on territory it has seized.

Zuhair al-Chalabi, head of the National Reconciliation Committee in Mosul, said in a phone interview that towns near the dam would need to be captured before Kurdish forces known as the peshmerga could attempt to retake the dam.

“We are making preparations to retake Mosul Dam, but so far we haven’t deployed our forces on the ground to do so,” Halogard Hikmat, a senior Kurdish peshmerga military official said by phone from Erbil. “The U.S. airstrikes are helping.”

At least nine airstrikes conducted yesterday near the dam and Erbil in northern Iraq destroyed or damaged four armored personnel carriers, seven armed vehicles, two Humvees and an armored vehicle, according to a statement issued by U.S. Central Command in Tampa, Florida.

Until this latest air offensive, the few dozen strikes waged over the last week had been limited to protecting U.S. personnel near Erbil, the Kurdish regional capital, and attacking militants around Mount Sinjar, where thousands of Yezidi civilians had been trapped seeking refuge.

While these strikes were aimed at stopping the advance of the Islamic State, the attacks near the Mosul dam marked the first effort at rolling back the militants’ gains.

“Mosul city would drown within three hours” if the dam broke, said Aziz Alwash, an Iraqi environmental adviser, in an Aug. 10 interview. Other cities down the road to Baghdad also would be inundated, while the capital would be under water within four hours, he said. The dam, completed in 1986, has a capacity of 20 billion to 30 billion cubic meters.

The Obama administration had hinted it was prepared to expand the campaign if needed.

The Pentagon’s top spokesman, Rear Admiral John Kirby, said last week that airstrikes could occur “anywhere in Iraq, including down in Baghdad.” Even so, he said at a briefing, “We’re not going to become Iraq’s air force.”

Strengthened with weapons seized from the Iraqi army, the Islamic State, previously known as the Islamic State in Iraq and the Levant, has inspired terror with reports of beheadings and crucifixions, even as it seizes strategic assets such as dams and oil fields.

At least 700 civilians from the al-Sheetat tribe in eastern Syria’s Deir Ezzour province have been executed in past two weeks, the U.K.-based Syrian Observatory for Human Rights said in an e-mailed statement yesterday. The fate of hundreds of other tribe members remains unknown, the group said.

While the U.S. intelligence community had estimated that the Islamic State had about 10,000 fighters in Syria and Iraq before it captured Mosul, that estimate is now being revised upward, several intelligence officials said at a briefing last week on condition of anonymity to discuss the matter.

As Obama authorized the airstrikes, the first direct intervention by the U.S. military in Iraq since the withdrawal of all troops in 2011, he set the formation of a new Iraqi government as a condition for increasing U.S. military support.

That prospect was strengthened last week, when Prime Minister Nouri al-Maliki agreed to step aside after his backing at home and overseas had crumbled.

“Maliki has left and the threat from the IS continues to grow,” said Anthony Cordesman, a defense analyst at the Center for Strategic and International Studies in Washington, referring to the Islamic State. “The fact is that either the U.S. steadily increases its air, intelligence, advisory and arms support, or IS will become a steadily more serious threat,” he said in an e-mailed statement.

As the U.S. steps up its military campaign, Iraq’s leader-in-waiting Haidar al-Abadi has vowed to seek national unity.

In his first comments since the dispute ended over Iraq’s leadership, Abadi vowed to build an inclusive government. He won backing from Iraq’s top Shiite cleric, while Massoud Barzani, president of the largely autonomous Kurdish region, said he’d support the premier-designate in a call for a government that “involves all Iraqi factions,” the state-run National Iraqi News Agency reported.

Abadi said he will seek to “accommodate segments of the Iraqi people and unite them to eliminate terrorism,” Al-Mada news reported on its website.

The formation of a unified government won’t be an easy task.

Iraq’s population is one of the most religiously and ethnically diverse in the Middle East. Along with the majority Arabs and Kurds, minority ethnic groups include Assyrians, Armenians and Turkmens. Religiously, a majority are Shiite Muslims and about a third Sunnis, while Christians make up about 4 percent of Iraqis, and Yezidis are among the remaining 2 percent, according to Columbia University’s School of International and Public Affairs.

Minority Sunnis had accused Maliki, a Shiite, of alienating their community.

Sunnis want a “prime minister that makes them feel that he is different from Maliki by making new policy based on justice, equality and law enforcement in an equal way for all Iraqis,” Hamed Al-Mutlaq, a Sunni lawmaker, said by phone. “If Sunnis feel that Abadi’s policies are just, there will be no presence for the Islamic State.”

In a sign of the challenge facing Maliki’s successor, the head of an influential Sunni tribe in western Iraq, Rafei Mishen al-Jumaily, said by phone he would continue to support the Islamic State against the government, which would be “wasting its time” if it made peace overtures.

“We will continue to fight the government until the end and we promise we will liberate Baghdad,” Jumaily said.