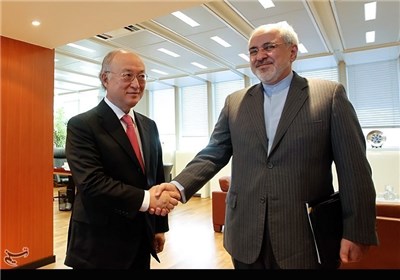 In a meeting with IAEA Chief Yukiya Amano in Tehran, Mohammad Javad Zarif referred to the United Nations nuclear watchdog as “the sole organization with the international authority” on the nuclear issues.

The visiting UN official, for his part, underlined that the IAEA will do its duties as a professional and impartial organization within the framework of the agency’s regulations.

Zarif and Amano also conducted a review of the course of cooperation between Iran and the IAEA, with both emphasizing the necessity for the implementation of a joint statement the two sides signed in November 2013.

This is Amano’s second visit to Iran over the past year. In November last year, the Japanese chief of the IAEA visited Iran at the invitation of Head of the Atomic Energy Organization of Iran (AEOI) Ali Akbar Salehi.

The two sides signed a joint statement at the time to outline a roadmap on bilateral cooperation on certain outstanding issues.

Under the deal, Iran agreed, on a voluntary basis, to allow the IAEA inspectors to visit the Arak heavy water plant and the Gachin uranium mine.