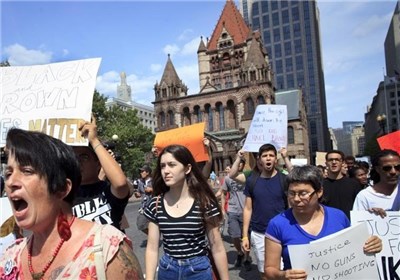 Chanting slogans such as, “Hey hey, ho ho, police brutality has got to go,” the diverse crowd marched peacefully down Dartmouth Street and Columbus Avenue, numbering a little more than 100 initially but swelling to twice that.

Boston police monitored marchers and held traffic for them. “The protest was peaceful in nature, and no arrests were made,” said Officer James Kenneally, a spokesman.

The civil interaction contrasted with relations between police and the public in Missouri and in other incidents cited by protesters, The Boston Globe reported.

“It’s got to end somewhere,” said Hawkesworth, 24, who wore a T-shirt remembering D.J. Henry, a Pace University student from Easton fatally shot by a Pleasantville, N.Y., police officer in 2010.

Hawkesworth works with Henry’s family to spread awareness and to plan events in his memory, she said.

“It bothers me mentally to see these families without their family members, and they have the potential to be something great,” she said.

In announcing the officer’s name, Jackson also released documents alleging that shortly before his death Brown had stolen a box of cigars from a convenience store, shoving a clerk on his way out the door.