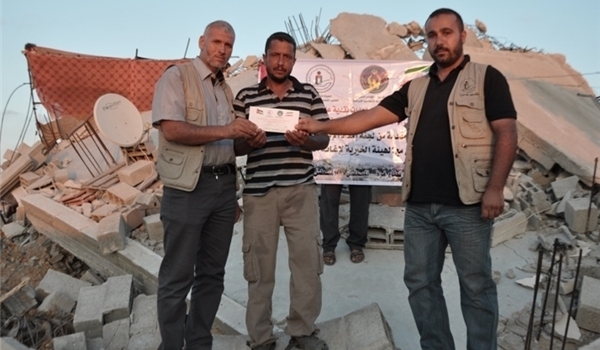 The Charity of Help for People of Palestine assisted the Imam Khomeini Relief Committee with the distribution of its financial aids among hundreds of the Palestinian families in Gaza.

A member of the Central Committee for Helping People of Gaza said that Iran’s help for the people of Gaza was part of the country’s support for the Palestinian nation’s resistance, and covered hundreds of Palestinian families residing in the Gaza Strip whose houses have been completely demolished during the recent Israeli raid.

“Imam Khomeini Relief Committee has dispatched its urgent financial aid within the framework of a relief and aid program to help the Gazans meet their needs,” Avaz Abou Daqeh said.

“They (the Israelis) kill children, women and the elderly people and unfortunately do no allow us to help them,” President Rouhani said.

He noted that Iran is ready to send medicine and medical teams to Gaza to treat the wounded people, and said, “We are ready to accept the injured Palestinians in Iranian hospitals.”

Over 2,000 Gazans, mostly women and children, have been killed and over 11,000 others were severely wounded in the Israeli forces’ war against the Strip since July 8.