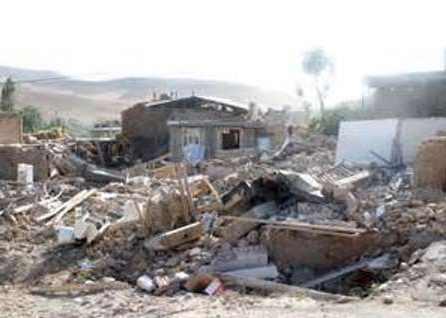 A powerful earthquake measuring 6.1 on the Richter scale has jolted three provinces in western Iran, with dozens wounded.

According to the Iranian Seismological Center, the quake hit two western provinces of Ilam and Lorestan as well as Khuzestan Province in the southwest of the country at 07:02 a.m. local time (02:32 GMT) on Monday.

Its epicenter was located in Murmori, Ilam province, at 32.7 degrees north latitude and 47.7 degrees east longitude.

According to latest reports, 50 people were injured by the tremor, which also destroyed mud-brick houses in Murmuri.

The quake destroyed telecommunications department in the city of Abdanan in the province making it impossible to estimate the amount of damages inflicted on the city’s rural areas.

Governor of Abdanan Majid Asgari said that rural areas suffered heavy damage by the strong quake, adding that some villages were totally destroyed.

Also on Monday, another earthquake registering 3.6 on the Richter scale hit areas between the northern province of Guilan and the northwestern province of Ardebil at 6.32 a.m. local time (02:00 GMT).

Located on seismic fault lines, Iran is prone to earthquakes and experiences at least one slight tremor every day on average.