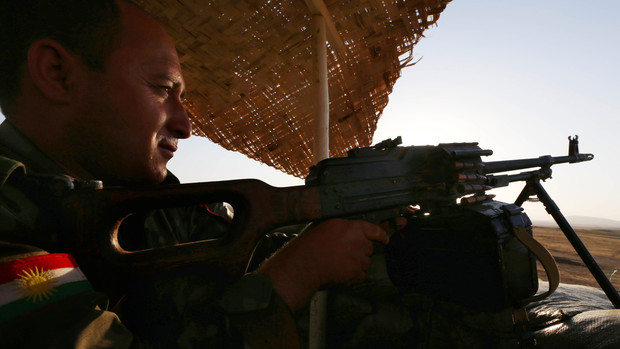 U.S. said to carry out airstrikes in north Iraq

The U.S. carried out airstrikes on Islamic State targets in northern Iraq to protect Yezidis and prevent damage to a critical dam, according to a U.S. Defense Department official.

The largest number of U.S. aircraft to date took part in the strikes against Islamic State positions near Mosul, the official said on condition of anonymity. A mix of drones, Navy F-18s and F-16s hit checkpoints and personnel, the official said. Iraq’s leader-in-waiting Haidar al-Abadi vowed earlier to seek national unity.

The attacks are part of a U.S. effort announced earlier this month by PresidentBarack Obama to halt the advance of the Islamist insurgency in Iraq. Instability since militants took control of Mosul in early June, added to political deadlock in the capital Baghdad, has raised concern that output at OPEC’s No. 2 oil producer will be disrupted.

In his first comments since ending a dispute over who will lead the country, Abadi vowed to fight graft and build an inclusive government to counter the insurgency. Poised to replace caretaker Prime Minister Nouri al-Maliki, Abadi won backing from Iraq’s top Shiite cleric, while Massoud Barzani, president of the largely autonomous Kurdish region, said he’d support the premier-designate in a call for a government that “involves all Iraqi factions,” the state-run National Iraqi News Agency reported.

With the European Union agreeing yesterday to increase humanitarian aid to Iraq after some members joined the U.S. in aiding Kurdish forces to stop the military advance of Islamist insurgents in the country’s north, Abadi said he will seek to “accommodate segments of the Iraqi people and unite them to eliminate terrorism,” Al-Mada news reported on its website. Minority Sunnis accuse Maliki of alienating their community and some are backing militants who declared the formation of the Islamic State after an offensive in June.

Sunnis want a “Prime Minister that makes them feel that he is different from Maliki by making new policy based on justice, equality and law enforcement in an equal way for all Iraqis,” Hamed Al-Mutlaq, a Sunni lawmaker, said by phone. “If Sunnis feel that Abadi’s policies are just, there will be no presence for the Islamic State.”

Maliki was abandoned by his own party and leaders of Iraq’s minorities, who said his eight years of sectarian policies widened ethnic divisions in Iraq. He quit Aug. 14 as his backing at home and abroad crumbled, saying the change of leadership gave a chance to halt Iraq’s descent into violence.

As Maliki fought for weeks for the right to a third term after inconclusive elections, Sunni Islamic State forces pushed into new areas of northern Iraq, seizing towns and oil fields and driving thousands of ethnic Yezidis and Christians from their homes. The chaos loosened Maliki’s grip on power, as past allies blamed him for a stalemate that exacerbated the advance by militants.

In a sign of the challenge facing Maliki’s successor, the head of an influential Sunni tribe in western Iraq, Rafei Mishen al-Jumaily, said that he would continue to support the Islamic State against the government, which would be “wasting its time” if it made peace overtures.

“We will continue to fight the government until the end and we promise we will liberate Baghdad,” Jumaily said by phone yesterday.

Recognizing the threat posed by the insurgents both to Iraq’s territorial integrity and its neighbors, the U.S. began a series of airstrikes on Islamic State fighters. At a meeting in Brussels, EU foreign ministers expressed support for member states that have decided to send arms to Kurdish forces battling to take back territory overrun by the militants.

Under the constitution, Abadi has until mid-September to form a cabinet. He’ll have to break with Maliki’s brand of Shiite-dominated politics if he’s to succeed and hand real power to rival groups, according to analysts.

“All the power is still concentrated with the prime minister,” Mustafa Alani, an analyst at the Geneva-based Gulf Research Center, said by telephone yesterday. “Without reforming the political system, it will only be a temporary solution to the country’s problems. The other ministers — whether Kurdish or Sunni — have no power. This has to change.”

Iraq’s 2028 bonds gained the most since April after Maliki’s resignation, with yields on the securities dropping 23 basis points, or 0.23 percentage point, to 6.92 percent.

Abadi’s nomination has had the unusual effect of drawing support both from the U.S. and fromIran, which has major influence over its neighbor Iraq’s Shiites and funds several Shiite militia groups. The EU and the Arab League have also backed Abadi’s appointment.

“Iraq must see a smooth transition of power,” U.K. Foreign Secretary Philip Hammond said in an e-mailed statement yesterday. The U.K. hopes that Maliki’s decision to leave office “will contribute to the quick formation of a unified and inclusive government that can address the serious security, humanitarian and political challenges that Iraq faces.”

President Obama, who ordered the airstrikes last week and has said he’d be more inclined to increase military support to Iraqi forces once there’s a new government, should do so quickly now, said two of his most vocal critics.

“This should remove any reason for the Obama administration to delay any further in providing our full support to Iraqis and Syrians who are fighting,” Islamic State, said Senators John McCain ofArizona and Lindsey Graham of South Carolina, Republicans who accuse Obama of not doing enough.

The United Nations Security Council anonymously adopted a resolution yesterday that placed asset and travel bans on six individuals it said were members of the Islamic State and the Al-Nusrah Front, which has been active in Syria.

France has preempted an EU-wide agreement and started delivering weapons to Kurdish forces. The U.K., Germany and Italy have indicated they may follow, while Czech officials are in talks with the government in Baghdad and with Kurdish authorities on supplies of ammunition from the Czech military and light firearms from Czech producers, the Prague-based Foreign Ministry said in response to e-mailed questions.